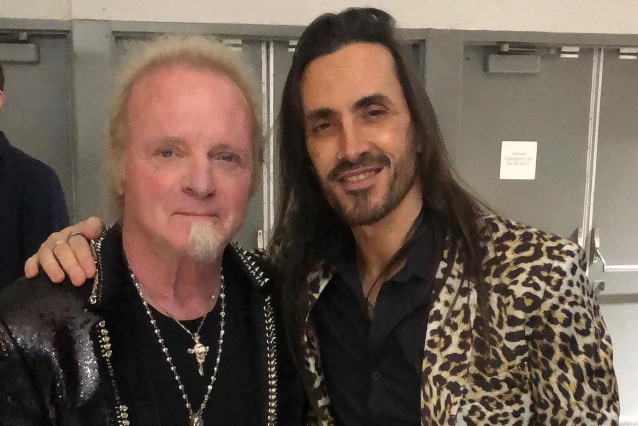 NUNO BETTENCOURT On JOEY KRAMER's Dispute With AEROSMITH: 'It's Nobody's Business To Judge'

EXTREME guitarist Nuno Bettencourt has slammed the media for its coverage of Joey Kramer's dispute with the rest of AEROSMITH, saying that "they are, and always will be, brothers."

Earlier in the week, Kramer filed a lawsuit against his bandmates for preventing him from performing with them at Sunday's Grammy Awards as well as last night's 30th-anniversary MusiCares benefit gala, where AEROSMITH was honored as the 2020 MusiCares Person Of The Year.

Kramer ended up joining his AEROSMITH bandmates as they accepted the 2020 MusiCares Person Of The Year award at the Los Angeles Convention Center, but did not perform with the group.

Bettencourt, who also played at the MusiCares benefit gala, took to his social media Friday night to share a photo of him with Kramer and included the following message: "Here at Grammy'sMusic Cares... backstage with the one and only JOEY KRAMER!!! The backbone that is AEROSMITH. He IS being honored tonight along with with the bad boys from Boston.

"Unfortunately... today's Supreme Court.... Social Media... started ripping the band, and all artists associated with honoring these guys, after seeing a pathetic TMZ... showing the private trials and tribulations that bands go through.

"50 years these guys have survived EVERYTHING... more than ANY band on this fucking planet. And yes, bands, we fight, we breakup, we reunite... but it's nobody's business to judge. As none of us are on the inside. So when you see a clip that's out of context... of their true reality from a network who makes their money basically stalking and making fun of celebrities and artists in their weakest periods and lows of their personal lives.... just know that JOEY KRAMER is here... why? Because THEY ARE AND ALWAYS WILL BE BROTHERS. regardless if they sometimes have to be pulled apart like family and can't rehearse and play together... for now."

The MusiCares gala took place two days after a Massachusetts judge ruled against Kramer in his bid to perform with AEROSMITH at two Grammy-related events this weekend.

After Kramer injured his shoulder last year, his drum tech filled in for a few gigs during AEROSMITH's residency in Las Vegas. Kramer did, however, perform with the rest of AEROSMITH in July at the Twin Cities Summer Jam in Shakopee.

When Kramer arrived at a rehearsal studio in Los Angeles earlier this week to play with his AEROSMITH bandmates, he was met with two apologetic security guards, who informed him that the other four members of the group hired them to keep him from entering the venue.

.
Here at Grammy’s Music Cares... backstage with the one and only JOEY KRAMER!!!
The backbone that is Aerosmith. He IS...