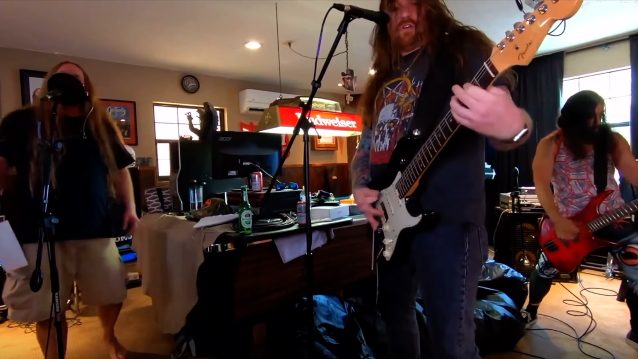 Earlier in the month, OBITUARY announced a new two-part spring livestream series. The band performed its favorite songs on March 27 and will run through its classic third album, 1992's "The End Complete", in its entirety on April 3.

POWER TRIP confirmed Riley's death in a statement on August 25, 2020.

Last week, OBITUARY frontman John Tardy confirmed to France's United Rock Nations that the band has used some of the downtime during the coronavirus pandemic to work on material for a new studio album. "We've definitely been working on new tunes, and we've been taking our time," he said (as transcribed by BLABBERMOUTH.NET). "We didn't feel like releasing [a new album] now in the middle of the pandemic when you can't go on tour and support it is not what we wanted to do, so we're in no hurry. But by the time next year comes around, we're gonna be hitting the road again. We're getting tours set up, and we will be releasing another album next year before we hit the road and start touring again. So we are currently working on new material."