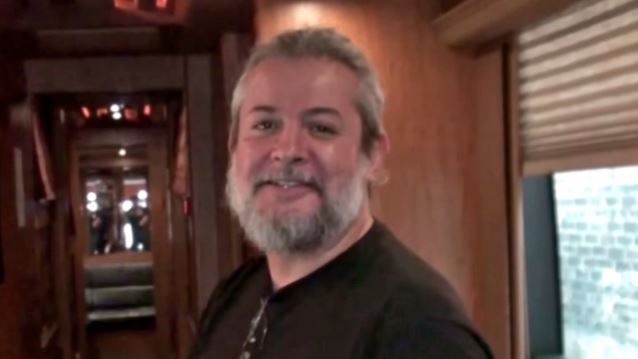 On The Tour Bus With SEPULTURA (Video)

Each episode of Digital Tour Bus's "Bus Invaders" takes you inside the touring vehicle of one of today's top touring acts. In the latest episode, which was filmed on May 22 in Chicago, Illinois, Brazilian/American metallers SEPULTURA take you on a tour of their bus while on the road in North America with DESTRUCTION and ARSIS.

On June 5, SEPULTURA released a limited-edition seven-inch single to mark its 30th anniversary. "Under My Skin" features artwork of fan tattoos on its cover, with a live version of "Kairos" on the b-side. The single was issued on black, yellow and green vinyl, with only 200 copies of each version pressed.

SEPULTURA's North American tour with DESTRUCTION and ARSIS kicked off in Phoenix, Arizona on May 10 and ended on June 14 in Grand Junction, Colorado.

SEPULTURA was joined by legendary guitarist Steve Vai on stage during the band's May 9 performance at the Rock In Rio USA festival in Las Vegas, Nevada.

This is not the first time a member of SEPULTURA has collaborated with DarkSide Books. Back in 2013, SEPULTURA guitarist Andreas Kisser wrote the foreword to the BLACK SABBATH biography "Destruição Desencadeada".

SEPULTURA's latest album, "The Mediator Between Head And Hands Must Be The Heart", came out on October 29, 2013 via Nuclear Blast.