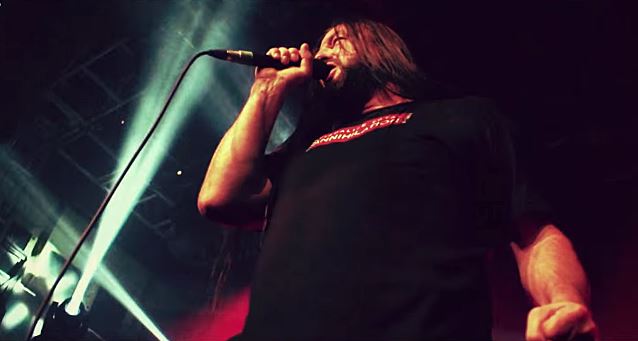 "66 Fucking 6", the new video from British thrashers ONSLAUGHT, can be seen below. The song is taken from the band's sixth album, "VI", which was released on September 20, 2013 via AFM Records. The follow-up to 2011's "Sounds Of Violence" was mixed by Thomas "Plec" Johansson (TIAMAT, SCAR SYMMETRY) at Panic Room studios in Skara, Sweden.

As previously reported, ONSLAUGHT vocalist Sy Keeler will sit out the band's upcoming "Thrash Invasion Tour 2014" of the U.S., Canada and South America due to health issues with his son. He will be replaced for the duration of the trek by former ANTHRAX singer Neil Turbin.

Says Keeler: "I know you are going to be disappointed with my decision as am I, but I sincerely hope you can understand our situation.

Adds ONSLAUGHT guitarist Nige Rockett: "We're extremely gutted that Sy cannot make this tour and, of course, we wish Sy's family all the best in this difficult time. We are positive things will improve in the very near future and look forward to having Sy with us back real soon.

ONSLAUGHT "Thrash Invasion 2014" with ARTILLERY will kick off on October 23 in Brooklyn, New York.