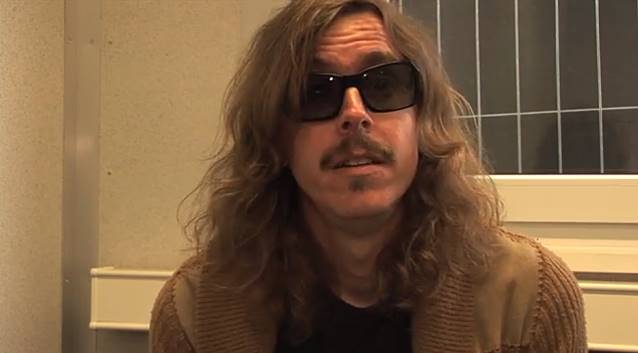 OPETH Mainman On Next Album: 'It's A Metal Record And A Progressive Record And Something Else Too'

Guitarist/vocalist Mikael Åkerfeldt of Swedish progressive metallers OPETH spoke to U.K.'s Metal Hammer magazine about the progress of the songwriting sessions for the band's follow-up to 2011's "Heritage".

"I have eight songs written and the direction is going straight into the territory of 'all over the place!'" he laughed. "I think that's our strength, that we can do all these different things. We have a couple of calm songs, a couple of really heavy songs, one proper heavy metal song and I have one epic old-school OPETH song that reminds me of the first two records, with lots of riffs stacked up! I'm really happy with it all. I think we have something big on our hands this time."

The last OPETH album, "Heritage", received mixed reactions, with some fans claiming that the group had detached itself from its death metal past and gone for a more experimental approach, changing its sound in various new ways.

As always, Mikael is not at all bothered about how his band's new material will be received.

"I can't say if 'Heritage' haters will love or hate this album," he told Metal Hammer. "I don't want to accommodate anyone, Like, 'Oh, sorry guys! We made a mistake! We'll make a proper record for you this time so you're all happy!' I don't think along those lines. This isn't going to be a death metal record. If you know me and what I like, it won't be such a big surprise. It's a metal record and a progressive record and something else too. Each song is representative of OPETH. It's what I want to listen to, so it's business as usual."

Åkerfeldt revealed to Decibel magazine in a separate interview that he plans to enrich at least a few of the new OPETH tracks with strings.

"Some of these things could easily be done with synthetic sounds or effects," he said, "but recording the STORM CORROSION LP with Steven Wilson made me realize what a massive difference it can mean to incorporate the real shit. I'm semi-pretentious in my songwriting and sometimes I go all in. I think it's time for 'all in' with strings and the full monty. Hopefully it won't be a mess."

One of the songs that will appear on OPETH's forthcoming album was previously described by Åkerfeldt as a "crazy rip-off" of Italian prog outfit GOBLIN, which formed in 1972 and ran for ten years before splitting (the band has since reformed).

"It's a jam I came up with during the MASTODON/GHOST tour," he told Decibel, "that we ended up soundchecking. After a few days, you'd hear people in the corridors humming it. It's a fucking hit! But basically it's a not-so-subtle headbanging-type nod in GOBLIN's direction. And to avoid confusion, the song is even called 'Goblin'. My rip-off deteriorates mid-song and becomes fusion-esque darkened prog rock like MAHAVISHNU or ELP (yikes!). But it swings! It really does."

Speaking to the Swedish newspaper Expressen in September, Åkerfeldt stated about OPETH's plans for the upcoming CD: "We've been looking at [tracking the next album at] Rockfield Studios in Wales where QUEEN recorded 'Bohemian Rhapsody', but we haven't made a decision yet. But it will be an expensive album. There's a lot going on, lots of string arrangements that we haven't had in the past."

Åkerfeldt also revealed that he was going to produce the new OPETH album himself, explaining: "I love the way DIO's 'Holy Diver' sounds, this early-'80s sound where you can still hear the '70s, but the production is heavier. Right now I'm into having a similar production that isn't retro but it still sounds like real instruments and it's heavier than 'Heritage'."