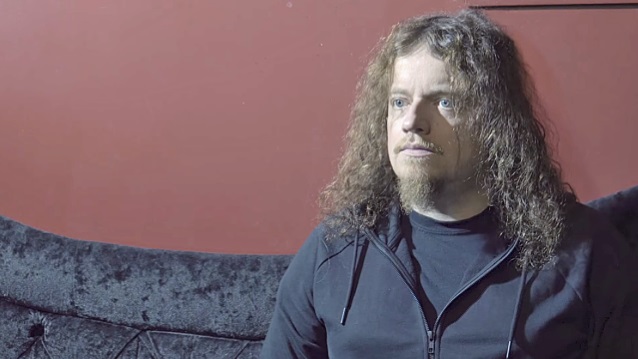 In a brand new interview conducted during OPETH's U.K. tour, guitarist Fredrik Åkesson was asked if he and his bandmates have commenced the songwriting process for the follow-up to 2016's "Sorceress" album. "In a way, yes, I would say," he replied (see video below). "This is the last run we do [in support of 'Soreceress'], and then we have a break. We might play some festivals during the summer, but before that, there's no gigs. So it's a bit of a break, but also starting to write for a new album, absolutely. So we'll see how that goes. But nothing is… no direction is settled yet or anything like that."

Pressed about whether the members of OPETH ever write any music on the road, Fredrik said: "For me personally, I sit around and play a lot of guitar during the day, and sometimes you come up with a little melody or a little riff or something, and I just record it in my voice memory in the phone. So small stuff like that. But it's not… Working-on-a-song kind of thing rarely happens on the road. Especially for Mike [OPETH guitarist/vocalist and main songwriter Mikael Åkerfeldt], I know he needs to be in his bubble, you know. So that's why we wanna take a break now as well, because for him, also, it's important to don't have to think about the shows or anything like that, just focus on coming up with new material."

Åkerfeldt recently told Eonmusic that he was hoping OPETH's next album would be "something different" and "something twisted." He added that the record would likely arrive by mid-to-late 2019. "I want to have a sabbatical, because we've been doing this for a long time, so I want to keep away and just be with my kids," he said. "Once I write songs, I want to sit and be."

"Sorceress" was released in September 2016. For the band's first effort for Nuclear Blast via OPETH's imprint label Moderbolaget Records, the group returned to Rockfield Studios in Wales, also home to pivotal releases from QUEEN, RUSH and JUDAS PRIEST, where the Swedes had tracked "Pale Communion" in 2014 with Tom Dalgety.