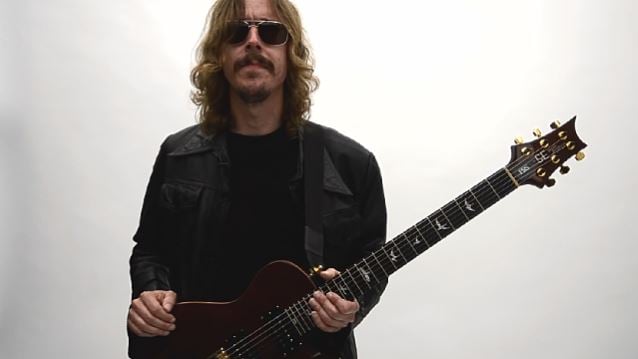 OPETH's MIKAEL ÅKERFELDT: 'People Should Be Happy That PINK FLOYD Are Doing A New Record'

Peter Hodgson of iHeartGuitarBlog.com recently conducted an interview with guitarist/vocalist Mikael Åkerfeldt of Swedish progressive metallers OPETH. A couple of excerpts from the chat follow below.

iHeartGuitarBlog.com: "Pale Communion" is such a headphones record!

Mikael: That's good, I like to hear that! I've been talking to the guys in the band and people in general about how people listen to music these days. Are they listening on stereo speakers and amplifiers and stuff like that, or on the headphones? I was worried if people were getting the chance to listen to it on nice headphones instead of shitty computer speakers.

iHeartGuitarBlog.com: Was there a particular song or moment that dictated where this album was going to go?

Mikael: Yeah, you could say that. The first song I wrote set the standard for the rest of the record — or at least I got some type of idea what I wanted to do with the record. That was the last song on there, called "Faith In Others". I wrote that song and it ended up being quite a melodic song, which gave me something of an idea for the rest of the record. I wanted to focus on vocal melodies and melodies overall for this album than I've done before.

iHeartGuitarBlog.com: There's always going to be the guys who are, like, "Where are the death vocals?" but you also have a lot of fans who will follow you anywhere you take them.

Mikael: Well, I hope so. We get a lot of shit for our choices musically, and I've had some fans even tell me to my face, "What are you doing? Why aren't you writing the good stuff anymore?" And I'm sorry to hear that but we don't play it safe. It's not like we deliberately want to be strange and fuck things up. It's almost like I'm latching on to how I've always been writing music, what I like, and I want to keep that intact. That's been intact since the first record. I understand the sensitive people who have loved the band, but maybe don't like the new stuff, but I don't like either for them to feel like we're turning our backs on them. We're still doing what we want to do, we're writing songs with the same process we always have, and besides, when we go out on tour, we're going to play the heavy shit they want to hear too. There's going to be a mix of material. So people will get their fix, but when it comes to new music that sounds like the old records, it's simply not gonna happen. We want to move on, y'know? But that's not necessarily saying we're never going to do a death metal scream. That might happen, y'know?

iHeartGuitarBlog.com: It's like the backlash against the new PINK FLOYD album coming out later this year. They're just trying to express themselves, and the whole reason people like them in the first place is because they like how they express themselves — and also it's not like the new album will walk across the shelf and break the old ones.

Mikael: Exactly. People have so many odd opinions about that. Like, referring back to us, it's like people saying it's not OPETH anymore, like they have the power to decide when it's not OPETH anymore, because it just simply doesn't fit their idea of what we are, y'know? But I think that's a bit unfair. I think people should be happy that PINK FLOYD are doing a new record, and it's debatable, but they should just shut up and enjoy it! If they like it or not, it is David Gilmour who has been the head of PINK FLOYD since the mid-'80s, and if the music features Rick Wright, who passed away, why wouldn't you want to be able to listen to it? And Nick Mason's probably gonna play drums, as far as I know, and Roger Waters is not gonna be angry! For me, I look forward to it, very much.

Read the entire interview at iHeartGuitarBlog.com.