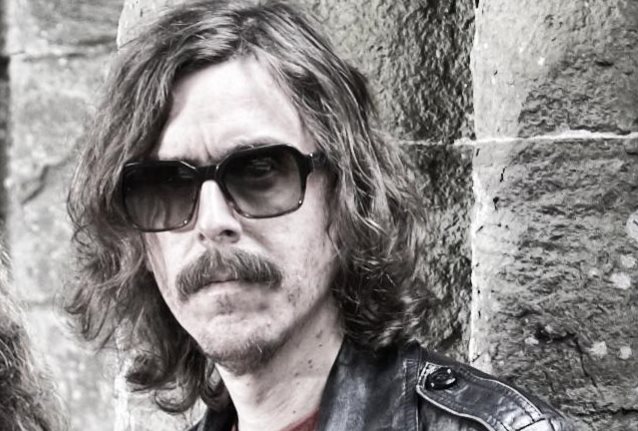 Chris Annunziata of 90.3 WMSC FM's "The Metal Teddy Bear Experience" conducted an interview with Mikael Åkerfeldt of Swedish metallers OPETH prior to the band's May 7 show at the Starland Ballroom in Sayreville, New Jersey with GOJIRA and DEVIN TOWNSEND PROJECT in support. You can listen to the full chat via the SoundCloud widget below. A few excerpts follow (transcribed by BLABBERMOUTH.NET).

Mikael: "I was pretty drunk at the time. We were touring with them on Gigantour [in 2006]. I think Dave took a liking to me a little bit. Every now and then he would not say 'hi' to me, depending on his mood, but we talked a lot. He's a good guy, a fun guy to talk to, contrary to what a lot of people think about him that he's a big narcissistic type of guy who's just moody as hell. Yeah, he could be a bit moody, but he's fun. What happened was I got to his dressing room, or their dressing room. I can't remember what I was doing there, to be honest. He was smoking this thing and I had never seen it. He was, like, 'Do you want a hit?' And the other guys too, like the crew, some people in there, and I was, like, 'Yeah, I'll try it.' But it's not for me. I don't smoke weed and that kind of stuff. I got really high, actually. I haven't tried anything. I'm Swedish. We drink beer. I'm a wine guy. I never tried all the classic-type drugs. I never tried anything."

On whether OPETH will ever play their 1996 "Morningrise" album in full:

Mikael: "I'm not into those kind of things. We've done those things a couple of times. It's all right, I guess. It would probably be fun. There's only five songs on that record because of that long track [the 20-minute-plus 'Black Rose Immortal']. We tried to make the record clock in at 66 minutes and 6 seconds, but we fucked it up during the mastering and it came in at 66 minutes and 7 seconds. We tried. You never know. I would probably say no to those kind of things. That was a long time ago. Those albums to most of our fans, they never reached that type of 'classic' status. I think the general public would probably prefer we would play an album that's a bit more well-known."

On whether he goes back and listens to older OPETH songs:

Mikael: "Yeah, like I said, we did listen to 'Black Rose Immortal' to see if we wanted to play it. We do that every now and then, but mostly, it sounds dull, but for research, what we could pull out that we haven't played that we could play. We could play all the songs, of course, but what would work? There's still a couple of songs from our catalog that we never played live, mostly from the newer records. But yeah, we do every now and then. We sometimes pick a song, like 'We haven't played this.' We'll rehearse it so everyone knows it, then last minute, most often we're like 'Ah, fuck it.'"

Mikael: "It's mostly him. I would say he's a bit of a workaholic. He's a friend of mine now. He's a cool guy, a great drummer, of course. I'd love to do something with him. Initially, when he brought it up, he wanted to do something really heavy, but I've been doing that for a really long time, and I was like, 'It's not really interesting for me. I want to do something else.' So it all depends. We talked about collaborating on the record for the project I had with Steven Wilson [PORCUPINE TREE] called STORM CORROSION, but we ended up with no drums. We didn't need a lot of drums for those songs. We just had bits and pieces here and there. I don't think that would be enough for Mike. You never know. It's one of those things that every time we meet or every time we're on e-mail, we talk about it a little. It hasn't materialized. We don't have any ideas on what that should be. Generally, I'm the type of musician that tries to put everything I want to into OPETH, so I don't really need for side projects. Him, he's with, of course he was with DREAM THEATER before, he has TRANSATLANTIC, WINERY DOGS, he was with ADRENALINE MOB, lots of different bands, lots of different styles. We try to bring everything into OPETH, which leaves me quite content. I don't have too much that I can't explore within the band."

OPETH's twelfth album, "Sorceress", was released last September. For the band's first effort for Nuclear Blast via OPETH's imprint label Moderbolaget Records, the group returned to Rockfield Studios in Wales, also home to pivotal releases from QUEEN, RUSH and JUDAS PRIEST, where the Swedes had tracked "Pale Communion" in 2014 with Tom Dalgety.