ORBWEAVER, the band featuring Randy Piro (GIGAN, HATE ETERNAL),has announced the addition of drummer Scott Spasiano to the group's ranks. Scott took over the drum and percussion duties after Mike Pena left the band to pursue his chosen career path.

Commented Piro: "Scott has the perfect blend of raw talent, and unmatched creativity. He quickly learned all of our material, and I really look forward to writing the new songs with him."

The new ORBWEAVER lineup's first appearance will be a special on-air performance on April 18 on Radio 305 in anticipation of the B420 Fest the next day at Churchill's Pub, Miami, Florida. They will also be discussing their upcoming EP, "Strange Transmissions From The Neuralnomicon".

Formed in late 2010, ORBWEAVER was brought to life "with the purpose of reshaping our physical realm through the use of ritual acoustics," according to a press release, "ultimately creating a tonal laboratory of sorts for the band to experiment sonically with no restraint or boundaries."

During the summer of 2010, Randy met drummer Mike Pena after a performance with Pena's band NUCLEAR INFANTRY. Both musicians shared the desire to create music and summon forces beyond comprehension, and shortly after the ORBWEAVER nucleus was formed.

ORBWEAVER's music is both chaotic, and sparse creating a terra-forma of bizarre environments for the experiencer to explore... Strangers, Atonal Druids, and ecology eating liquid forms of life are just a few of the inhabits of this strange, and swarthy sonic world. 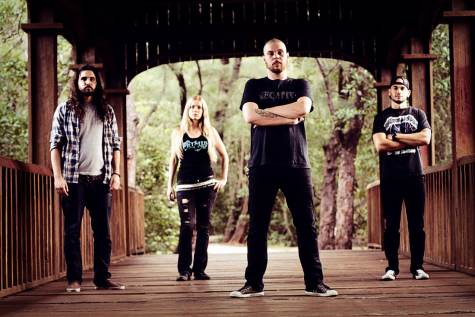