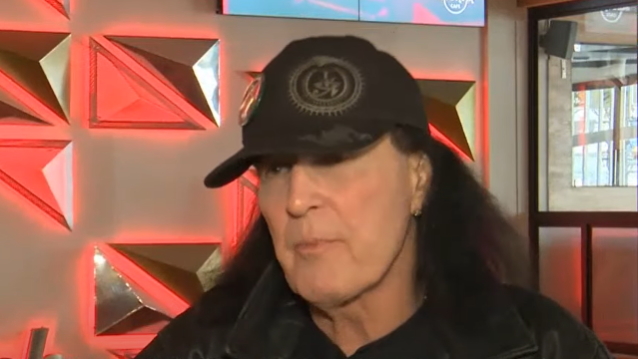 Original AC/DC Singer DAVE EVANS On Group's Early Days: 'We Believed That We Were The Best In The World Back Then'

In a new interview with Paraguay's ABC TV, original AC/DC singer Dave Evans reflected on his time with the band, saying (as transcribed by BLABBERMOUTH.NET): "It was very exciting. We were very young guys and very ambitious. We believed that we were the best in the world back then. We weren't the best then, but we believed that we would be. It happened so quickly. Within four or five months, we were recording our first record. It was incredible. To record a record back in those days was an almost-impossible task. There wasn't many record labels anywhere in the world and there were so many bands. So to get a record contract and to actually record a record back in those days was being like touched by God, really. That's how it was. So we were lucky. And our record also was a hit record straight away. And it was named as the best Australian group record of the year at the end of the year. So for a [new] band of young guys, that was an incredible achievement in Australia. Everything happened so quickly. And we did the biggest shows and all that kind of stuff. And, of course, it changed my life forever. And [it's] one of the reasons why I'm here [in Paraguay] — because of what happened so long ago."

Asked if he still keeps in touch with the Young brothers from AC/DC, Dave responded: "Well, Malcolm's dead now; he passed away. His son Ross is a close friend of mine, and we keep in contact. I haven't spoken to Angus for many years; he's a recluse. And I'm pretty much reclusive myself when I'm not touring. I'm away from people too. I live in the mountains, whenever I can, in Australia or in the forest somewhere away from people. So I haven't spoken to him for a long, long time. But I spoke with Ross Young, Malcolm's boy, only about a month ago or so."

Last fall, Evans recorded two new songs with legendary producer Flemming Rasmussen, best known for having been helmed three of METALLICA's early albums, plus winning a Grammy for his work on METALLICA's "One" in 1989. One of the tracks, "Guitarman", was written by Danish musician and composer Nicolas Robinson of THE UNIVERZALS, while the second track is a cover of an Elvis Presley classic that Evans had previously performed with AC/DC.

"Guitarman", featuring cover art by Ed Unitsky, will be released this month via Argentina's Chrystal Records in collaboration with Denmark's Interspace Rock Productions.

In a 2021 interview with DJ Grant from New Zealand's Galaxy 107 FM, Evans said about being replaced by Scott: "You've gotta remember that Bon Scott did a lot of the songs that I already did, like 'Baby, Please Don't Go', we already did that. That's the song that I got Angus [Young, AC/DC guitarist] up on my shoulders, and, of course, he used to watch us doing our show, so he copied that. I understand that he copied what I was doing. And the songs too, and re-recorded them and re-wrote the lyrics to some of the songs that I had already put down. But he was told to do that. I know that he was under instructions to do this, so I don't really hold it against Bon Scott for that, because when he joined the band, he was washed up at the time, and he got a great chance to do something, and he did too. He did a great job, but his lifestyle just let him down."

Last year, Dave was asked in an interview with The Rocker Diaries if he thought "that would be it" for AC/DC after Bon's death in 1980. He responded: "No, not at all. I mean, we all keep going. And AC/DC has had that many players through [the history of] the band. I don't know how many. 20? And three singers, plus a stand-in singer as well.