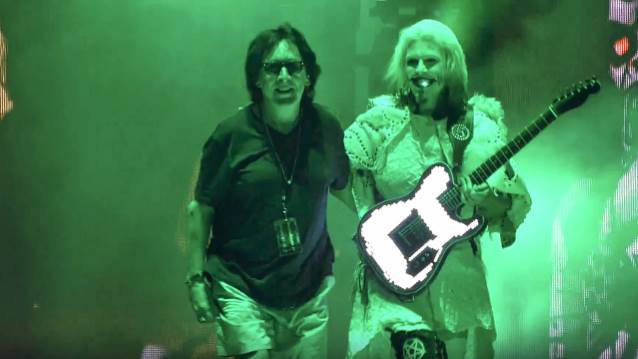 Criss, who was watching the performance sidestage, was brought out to the front of the stage by ROB ZOMBIE's frontman and namesake, who cited the KISS co-founding member as an early inspiration to become a musician.

This is not the first time Criss was seen at a ROB ZOMBIE concert. Back in May 2014, Criss joined the shock-rocker on stage at 93.3 WMMR MMR*B*Q at Susquehanna Bank Center in Camden, New Jersey to perform a cover of the KISS classic "God Of Thunder".

Zombie told The Pulse Of Radio a while back that KISS was one of his biggest influences when he was young. "There was three things in the '70s when I was a little kid that were incredibly influential to me," he said. "You know, Alice Cooper, Elton John and KISS. As a kid, I was just crazy about all three of those."

ROB ZOMBIE and MARILYN MANSON kicked off their "Twins Of Evil: The Second Coming" tour on July 11 at Detroit's DTE Energy Music Theatre.