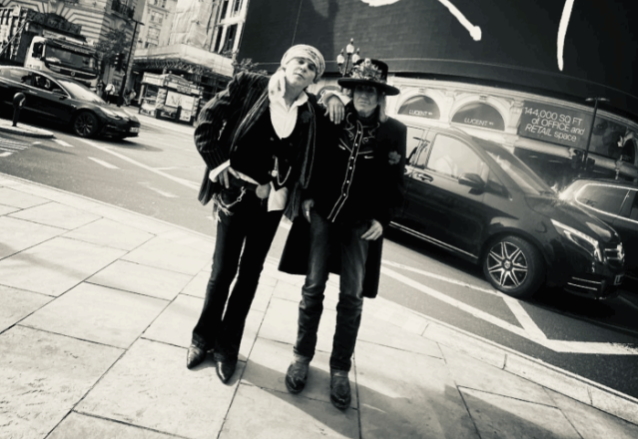 THE QUIREBOYS founder, frontman and songwriter Spike has announced that he has started writing new QUIREBOYS songs with the band's co-founder Guy Bailey. The material heralds the beginning of a new studio album and a new QUIREBOYS lineup that Spike is putting together for dates later in the year.

The news follows the public statement made by three of Spike's former bandmates expressing a desire to part company with the singer, although Spike has always maintained he has never, and would never, leave the band he founded, a band he fronts and says he has created the intellectual property for. THE QUIREBOYS is a band that has gone through various lineup changes over the years, with Spike being the only consistent, original member.

Spike, whose real name is Jonathan Gray, comments: "This week I met up with lifelong friend and band co-founder Guy Bailey. We've started writing new QUIREBOYS songs together — and the magic is still there. We've always written so well as a double act; we write quickly and there's natural chemistry. There's also a collection of unfinished and unreleased early QUIREBOYS songs that I wrote many years ago, many with Guy Bailey, around the time of recording 'A Bit of What You Fancy'. These songs have never seen the light of day but we're going to finish those as well.

"Looking back, the benchmark QUIREBOYS songs were written by Guy Bailey and myself. Our session this week took me back to our early days sharing a flat together in London in the '80s, where we'd spend the evenings playing acoustic guitars together in the front room. 'Hey You', '7 O'Clock', 'I Don't Love You Anymore' — that's where all those key QUIREBOYS songs came from; Guy Bailey and I bouncing ideas off each other, writing chords and lyrics together as we played the acoustics.

"It's really been great to go full circle, back to the beginnings of what has defined the QUIREBOYS story."

Guy Bailey comments: "Events of recent weeks have shocked me. For members of Spike, band to think they can sack him in a two-line statement and then elect themselves to use his band, name as their own beggars belief.

"Spike and I wrote all the original QUIREBOYS songs — and when I decided I didn't want to tread the boards anymore, I gave Spike my blessing to take the band forward as his own.

"The thing with the original band is it never really broke up. Whilst we have gone off and done different things, we have always stayed in touch as great friends — and it may now be time to get the gang back together again. These new songs mark the return of the original and only QUIREBOYS."

Spike adds: "The three former band members that split with me were each written to three weeks ago, setting out that they did not create the intellectual property in THE QUIREBOYS name, their limited company is not called THE QUIREBOYS, they should not present themselves as THE QUIREBOYS. I have received no reply but have clearly laid out the position. As such, I will continue with THE QUIREBOYS. I've never had any intention of doing otherwise. I never left the band.

"I have been moved by the enormous show of support from fans, venues, media, promoters and fellow musicians in the last month.

"To all those fans that have requested ticket refunds in recent weeks, rest assured — new QUIREBOYS music is coming everybody and I'll be back with my band, THE QUIREBOYS. New music, a new album and new shows from a new QUIREBOYS lineup — and you'll probably recognize a few of the faces.

"Together, let's keep it positive as we keep rock n roll alive.

"See you at the bar.

HEY YOU - THE ORIGINAL QUIREBOYS ARE BACK
SPIKE AND GUY BAILEY ARE WRITING THEIR FIRST NEW QUIREBOYS ALBUM TOGETHER FOR THE FIRST TIME IN OVER 30 YEARS pic.twitter.com/TaU3nckiKo