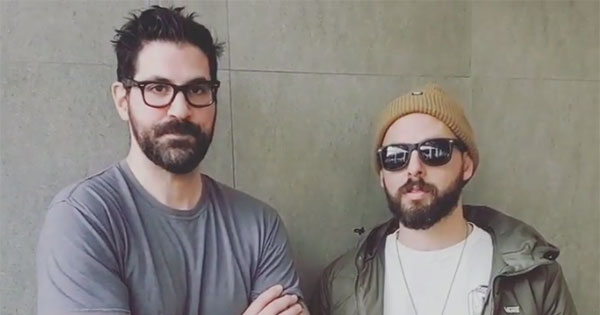 Two original members of THE DILLINGER ESCAPE PLAN are collaborating on an as-yet-unnamed new project.

A preview of "Choir Boy" is available below.

Minakakis last performed with THE DILLINGER ESCAPE PLAN during their December 2017 three-day residency at New York City's Terminal 5, marking the now-defunct band's final live appearances. Minakakis joined his former bandmates for renditions of several cuts from "Calculating Infinity" and the "Under The Running Board" EP, including "The Mullet Burden", "Sandbox Magician", "Abe The Cop" and "43% Burnt".

Happy New Year. Today we get to hear two original members of The Dillinger Escape Plan spew all over us with a new track from a yet to be named project. The song, featuring original singer Dimitri Minikakis and Ben Weinman, is available as a high quality wav file exclusively to the members of Ben's patreon.

Posted by The Dillinger Escape Plan on Tuesday, December 31, 2019