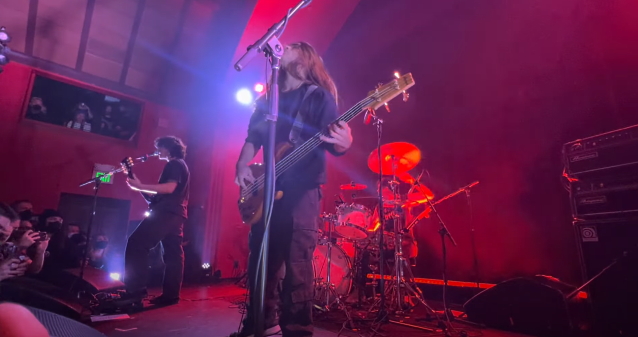 Fan-filmed video of the concert, which was part of a series of METALLICA's "San Francisco Takeover" events to help mark the group's 40th anniversary, can be seen below (courtesy of YouTube user "Julie Frohm").

OTTTO is fronted by Bryan Noah Ferretti on vocals and guitar, with Tye on bass and Ryan Duswalt on drums. The band's first LP comes out late 2021, which is a follow-up to their EP released last year.

Based out of Venice Beach, OTTTO is has strong roots in thrash, funk and metal. Fusing those genres, the band (whose members all range in age from 17 to 18) creates a powerful new style of music.

This past August, OTTTO released a new song called "Ride Low". The accompanying music was directed by Paul Marchand, an award-winning screenwriter, director and editor. His 2015 documentary "Jaco" debuted at the SXSW Film Festival, was streamed on Netflix and was produced by Robert Trujillo.

The band said about the clip: "Somewhere in Los Angeles, it's still the same as it always was — whirling helicopters, barking dogs, and the din of general insanity drift through busted single-pane windows on the hot summer breeze. Never mind the repo man, it's a city of angels, and if you don't give them what they want, they'll run you right into the ocean."