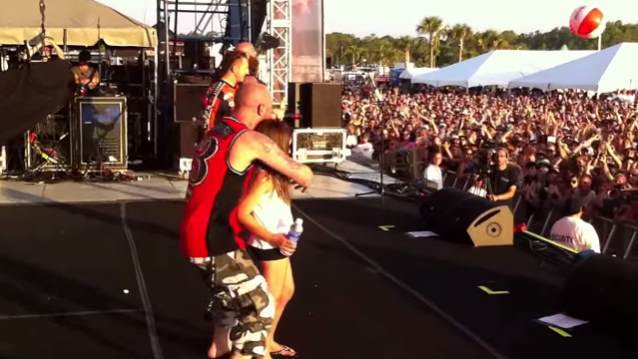 Fort Myers, Florida television station WINK conducted an investigation into a video of a nine-year-old girl who was taped standing on stage with FIVE FINGER DEATH PUNCH at last month's Fort Rock festival while the band's singer, Ivan Moody, screamed obscene lyrics into her ear. The clip, which can be viewed below, was filmed by the girl's dad who then posted it on YouTube for all the world to see.

In the video, you can see Moody with Olivia on stage in front of thousands of people. Ivan was apparently trying to get Olivia to sing along and to say the words "Burn Motherfucker Burn" from the song "Burn MF", but she didn't.

Miguel Fernandez, a Fort Myers attorney who counsels families and works with school kids, begged to differ, telling WINK: "This is a form of abuse. This child is being used as a prop.

"I feel sorry for this child. This child is helpless in that position. What does this child do? She's frozen," he said. "To hear lyrics like that, what does it promote? It promotes violence. It promotes criminal mischief. It promotes...just chaos."

Fernandez's sentiments were echoed by Lee County Sheriff Mike Scott who has been trying to protect children from obscene rappers and rockers who perform in Lee County. Scott said about the FIVE FINGER concert, "Words can't describe my disgust, and this should never, ever be allowed in a county park."

Danny Wimmer of Danny Wimmer Presents, which produced the Fort Rock festival with AEG Live, told WINK, "While we may not always personally agree with the actions of particular artists performing at our festivals, we support free speech and artistic integrity."

You can watch WINK's video report at this location.