New Jersey thrash metal veterans OVERKILL have announced the "Wings Over The USA" 2019 tour. Kicking off on April 25 in Baltimore, the trek will make stops in Pittsburgh, Chicago and Nashville before concluding in Boston on May 11. Joining OVERKILL on the dates will be DEATH ANGEL and ACT OF DEFIANCE.

OVERKILL frontman Bobby "Blitz" Ellsworth comments: "We look forward to bringing 'The Wings' over the USA. It's been a long road but the journey is not over yet. DEATH ANGEL and ACT OF DEFIANCE join us on this jaunt so prepare yourself for a righteous beating. Let the headbanging begin in April!"

Tickets for the tour are available for purchase this Friday, February 1 at 10 a.m. local time.

OVERKILL's 19th studio album, "The Wings Of War", will arrive on February 22 via Nuclear Blast. The disc was recorded at Gear Recording Studio in New Jersey, SKH Studio in Florida and Jrod Productions with engineering handled by bassist D.D. Verni and guitarist Dave Linsk. The album was produced by the band while Chris "Zeuss" Harris took care of the mixing and mastering. Travis Smith (NEVERMORE, OPETH, SOILWORK, DEATH) was again enlisted to create the artwork for the album. 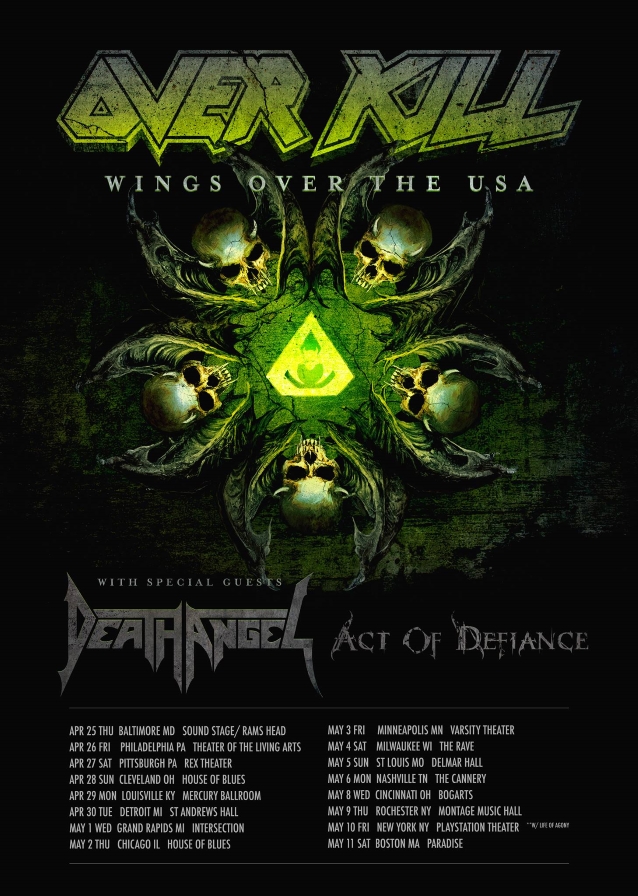