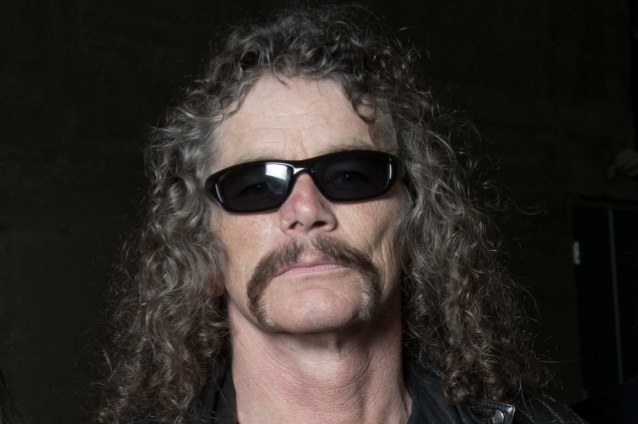 OVERKILL frontman Bobby "Blitz" Ellsworth says that he respects SLAYER's decision to call it quits, calling it an "individual choice" that is "their business" and not anyone else's.

Last month, SLAYER, one of metal's most popular and influential bands of the past four decades, announced its "final world tour" via a 30-second video. The group also confirmed that its last-ever North American run of dates would feature support from LAMB OF GOD, ANTHRAX, BEHEMOTH and TESTAMENT.

In an interview with Sticks For Stones, Ellsworth was asked how felt about SLAYER pulling the plug on an impressive three-and-a-half-decade career. "Oh, man, I don't make decisions for other people," he responded (hear audio below). "People should do what they wanna do. If they're done, they're done. They know better than I know. It's all about individual choice. I mean, they're cool guys. I just saw Gary [Holt, SLAYER and EXODUS guitarist] out in Los Angeles last weekend [at the NAMM show] — I did a METAL ALLEGIANCE song with him or two — and I never even brought it up, because, again, that's their business. So it's really not something that goes through my mind — 'How strange is this?' or 'How weird is this?' or 'Oh, no.' I don't think in those terms. I've always paid attention to my own porch and my own house as opposed to that of others."

OVERKILL has just returned to the studio to resume work on demos for its upcoming album. According to a post on the band's Facebook page, at least four new songs are in varying stages of completion at this point, with more to come.