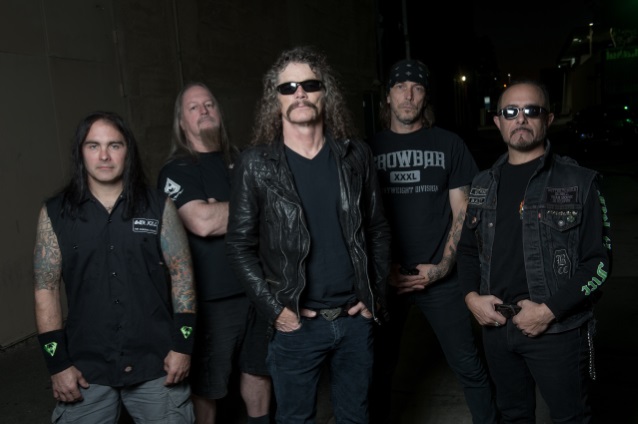 OVERKILL Is 'In Pre-Production' For Next Album

According to a post on OVERKILL drummer Jason Bittner's Facebook page, the band is currently "in pre-production" for the follow-up to 2017's "The Grinding Wheel" album.

The veteran New Jersey thrashers revealed in February that at least four new songs were in varying stages of completion at that point, with more to come.

In a recent interview with Australia's 3D Radio, OVERKILL frontman Bobby "Blitz" Ellsworth stated about the band's songwriting and recording process: "Well, for us, coming from the old school, to some degree, it has to be physical. And what I mean by that is standing in a room with the others, splitting a pizza, splitting a beer, sweating, coming up with some good ideas, occasionally, or even more than occasionally, going, 'Oh my God! That sucked.' And then moving from there into what the modern era offers us, and that's the Pro Tools and trading files back and forth over the Internet, because instantaneous ideas can be traded from home now. So we use kind of a combination of the old 'let's sweat it out and tune the guitars up' to the modern day of 'let's get down with the computers and exchange our ideas.' So it works both ways for us. So it's a combination of the old and the new."

OVERKILL's next album will mark the band's recording debut with Bittner, who joined the group last year.

"The Grinding Wheel" was released in February 2017 via Nuclear Blast. The disc was produced by OVERKILL and mixed by Andy Sneap (MEGADETH, EXODUS, ACCEPT). The artwork was created again by Travis Smith (NEVERMORE, OPETH, SOILWORK, DEATH).

And were in pre production this week.......been awhile since I dusted the ‘ol Rolands off but we’re pressed for space...