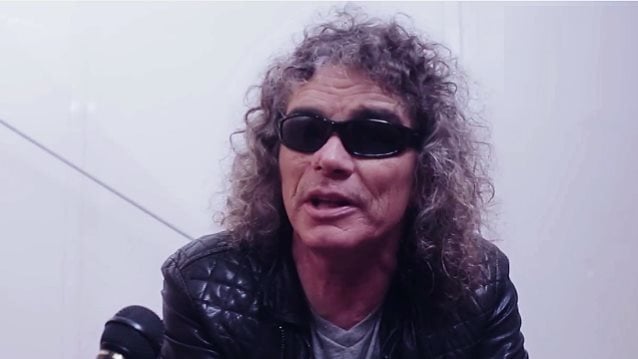 Metal Maniac video magazine conducted an interview with vocalist Bobby "Blitz" Ellsworth of New Jersey thrash metal veterans OVERKILL at this year's Hellfest on June 17 in Clisson, France. You can now watch the chat below.

Speaking about the relationship between the Internet's rise and the sharp decline in album sales, and how it has made it harder for bands to survive, Blitz said: "Back in the day, there was obviously no Internet. The Internet was invented while OVERKILL was existed; we existed prior to the World Wide Web."

He continued: I think [the Internet is] a double-edged sword. I think that, sure, it's great to have that type of exposure and instant information, and it makes the world smaller; these are just obvious qualities that it has.

"One of the things that social media has done has gotten so many people to think along an exact line or parallel line. There's no opposite thinking [anymore]. Whether you're a metal fan or a thrash fan or a pop fan or jazz fan, the Internet provides you with what you want. You consider it to be something that is… It's not just a necessity; it's just the way it should be. Free is the way it should be. Of course, all my friends think that way too. Does it make it right? It doesn't make it right. And it actually does hurt the scene. So you have to find ways to reinvent yourself. So instead of complaining about it, I look at it more as saying, okay, we have to reinvent. We have to partner with the right people. We have to — as business people — focus on our market. Who's the collectors? Who wants the vinyl? Who wants this? So you have to think differently to be able to survive in the age of the Internet. 'Cause the Internet will be really one of the reasons that this scene eventually will go away. It chips away at it continuously — it just eats it away and eats it away. It gives you great promotion, but on a slow, slow process, it's eating the scene."

Pressed about whether he truly believes the heavy metal scene will eventually go away because of the Internet, Blitz clarified: "There'll always be a want for that emotional chord to be struck, but with regard to all your favorite bands, eventually they'll just have to go away. And that'll have nothing to do with age. That'll have to do with, 'We just can't do this anymore. It's just not possible to do this and eat.' [Laughs] And everybody'll say, 'Oh, that's just too bad.' But they've become the reason for it; that's really part of the reason. So [for bands like us] it's [about] reinventing yourself, it's figuring out ways to get YouTube to up their royalties, it's getting Spotify to up their royalties, Google Play, etc. etc. So, from a business perspective, I think it's reinventing."

He went on to say: "I'm not concerned with regard to the result; I'm more about living in this particular moment. I'm not looking forward to my future. My future is in two hours on that stage; that's where I'd rather concentrate my efforts, because it's really a fruitless effort to say, 'Oh, this sucks and that sucks, and I should have more.' That's not what I'm saying. But I am saying that it's slowly eating it away and weakening it in places that it shouldn't be, and only because of common opinion. That's all."

Blitz also talked about the progress of the recording sessions for OVERKILL's follow-up to 2014's "White Devil Armory" album. He said: "The new record comes out in October of 2016. The drums, guitars are done. D.D.'s [Verni] gearing up to do the bass as soon as we get home. I should be singing by July 1st. Andy Sneap will be mixing it. We'll do the production. This is kind of the way we work, on those schedules — by pushing and pushing and pushing."