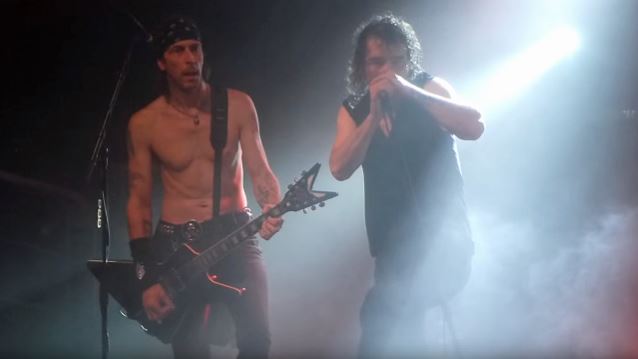 New Jersey thrashers OVERKILL are utilizing a stand-in drummer — their soundman Eddy Garcia, who is also a member of the El Paso, Texas band PISSING RAZORS — for their current European tour because their regular drummer, Ron Lipnicki, was forced to stay home due to undisclosed family issues.

Fan-filmed video footage of OVERKILL's April 7 concert in Leeds, England — featuring Garcia behind the drum kit — can be seen below.

Garcia previously played with OVERKILL for their appearance on the 2012 edition of the 70000 Tons Of Metal cruise.

OVERKILL will play a special anniversary show tonight (Saturday, April 16) at Turbinenhalle 2 in Oberhausen, Germany. The evening will see the band perform their classic records "Horrorscope" (which will be celebrating its 25th anniversary) and "Feel The Fire" (30th anniversary) in their entirety. And if that wasn't enough, the show will be professionally filmed and recorded for an upcoming DVD and CD.

OVERKILL frontman Bobby "Blitz" Ellsworth told Metaleater about the Oberhausen concert: "We're gonna come out, we're gonna do 'Horrorscope', and then we're gonna take fifteen minutes to realize how old we are and talk about whether we can actually do the second half of the show. [Laughs] We're gonna start downing Red Bulls and vodka, and then shoot back out to the stage after a ten- or fifteen-minute interlude where we're gonna have some videos playing of the band while they recorded the 'Horrorscope' record, and then go out and do 'Feel The Fire' in its entirety. So it's quite a unique night. And we're not doing it the entire tour; we're doing it at one show. So we thought it was kind of unique to do that."

Regarding how the idea to perform the two albums in their entirety came about, Ellsworth said: "It was something that we came up as an idea with the record company, Nuclear [Blast], and they were all over it. They said, 'Wow, what a great idea! It's not an entire tour. It's one night. It makes it special. Let's film it.' And we were, like, 'That's exactly what we wanted to hear from you guys.' So that's where we are with this."

OVERKILL has demoed at least eleven new songs for the band's upcoming follow-up to 2014's "White Devil Armory", tentatively due in October via Nuclear Blast. Blitz said that the fact that OVERKILL is touring while finalizing the songs for its upcoming album is beneficial when it comes to capturing the explosive nature of the band's performances in the studio environment. He said: "For me, it's kind of cool to go out and be doing live shows as the record is taking form, because it translates into the writing. You know, when you're doing shows and then you're finishing shows off — my end of the songs, which are the melodies and the lyrics — I can kind of infuse that natural energy into it, if I was just most recently on stage. It's not feigned then; it's my last memory of the band, and I really try to live in the present and the near past."

OVERKILL's first worldwide release on Nuclear Blast was a special box set comprised of the band's back catalog, made available last September. Titled "Historikill: 1995 - 2007", it contains 11 OVERKILL albums on 13 CDs and a bonus CD (containing demos, remixes and an unreleased cover song) in digi sleeves.

"White Devil Armory" was released on July 22, 2014 in North America via eOne Music and on July 18, 2014 in Europe through Nuclear Blast Records. The effort was tracked at Gear Recording and was mixed by Greg Reely, who also worked on 2012's "The Electric Age". 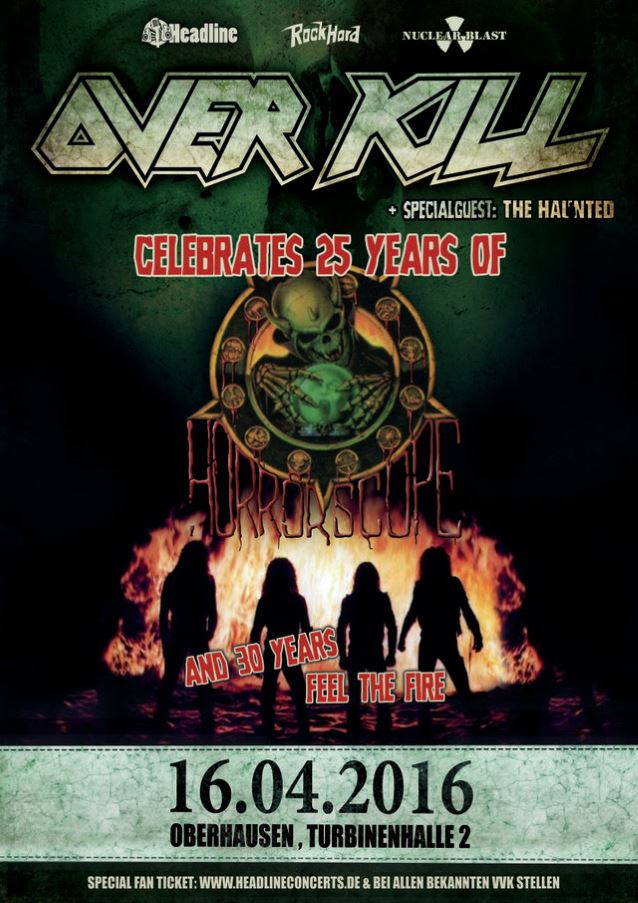