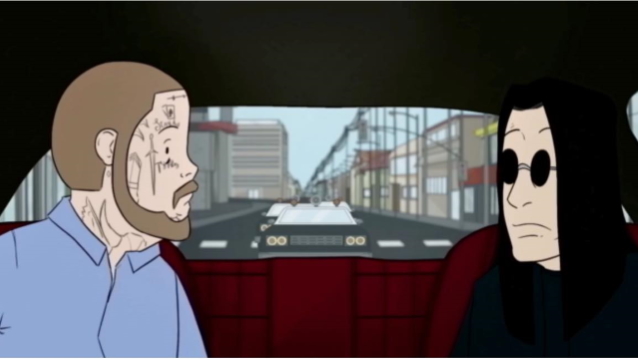 At a SiriusXM listening party last year to celebrate the release of "Ordinary Man", Ozzy recounted the song's inspiration. While recording BLACK SABBATH's "Vol. 4" in Bel Air, California, Osbourne triggered the home's security alarm and police surrounded the home, which he says had "piles of marijuana and cocaine." Osbourne adds, "I'm shouting, 'IT'S A FUCKIN' RAIIIIID," before hiding the drugs and ingesting cocaine while hiding in one of the home's bathrooms."

In the video, directed by Tomas Lenert, Ozzy and Post Malone team up for a truly wild ride. The clip begins with Osbourne and Malone at the infamous Bel Air, California house (which served as the inspiration for the song) before they lead police through the streets of the city and passing iconic Los Angeles landmarks on their journey.

"A couple of years ago I didn't even know who Post Malone was," Ozzy says. "Since then we've worked together on two studio tracks and have performed together twice. Understandably COVID-19 made it difficult to get together to shoot a music video for 'It's A Raid' so we opted for this wildly imagined animated video for the final single from the 'Ordinary Man' album." Ozzy, who's been in the studio working on a new album with producer Andrew Watt, adds that he "can't wait to for everyone to hear my new music."

This marks Osbourne's second duet with Malone. The two previously teamed on "Take What You Want" from Post's "Hollywood's Bleeding" album (which they also performed at 2019's American Music Awards). The track was produced by Watt, who collaborated with Osbourne for "Ordinary Man" as both producer and co-writer. Watt, who also produced Malone and brought the two artists together, played guitar on Ozzy's latest LP, co-writing and performing the music with GUNS N' ROSES bassist Duff McKagan and RED HOT CHILI PEPPERS drummer Chad Smith.

"It was a lot of fun to do though it's a lot different from my other albums," Ozzy said. "We recorded it quickly, which I haven't done since the first BLACK SABBATH album. This made it a different process, which I actually enjoyed."

Beyond the core band, "Ordinary Man" features a who's-who of Ozzy friends and collaborators including Elton John and Tom Morello.

"It all just came together," Ozzy explains of the guest stars. "Slash is a dear friend of mine, as is Elton. When I was writing 'Ordinary Man', it reminded me of an old Elton song and I said to Sharon, 'I wonder if he would sing on it?' We asked, and lo and behold, he agreed and sings and play piano on the song."