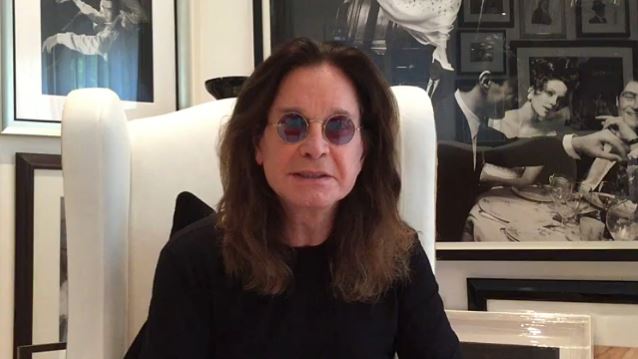 OZZY OSBOURNE: 'I Am Not Really Happy Being Sober, But I Don't Want To Get Drunk'

Ozzy Osbourne recently spoke to Goldmine about being a recovering alcoholic and his continuing battle against temptation and relapse. He said: "I am coming up on three [and a half] years sober, and I've just come back from a meeting, actually. I've reached a really weird place with it. I am not really happy being sober, but I don't want to get drunk. Someone told me that at three years sober they felt exactly the same.

"With meetings, you're never alone with your thoughts. My disease will go, 'You can take this, or you can do this' when I spend too much time alone with my thoughts. If I listen to it, then I go back and I am all right for a tour. It only stops being alright when I am fucked up everywhere, you know."

Asked if he has any regrets about his drug use, the BLACK SABBATH singer said: "No, because it was my destiny. I am lucky enough to have seen the errors of my way and wanted to do something about it.

"The first thing I quit was tobacco. I was just in Cuba with my son and I hadn't been going to meetings for a while. We were in this restaurant and this guy goes, 'Do you want to go upstairs and have a cigar?' I don't smoke, but my son Jack said he would like one. We go into this private room and there are these bottles of fucking rum everywhere. I thought to myself, 'It wouldn't be that bad.' Then I go to myself, 'Fuck off. You'd start with the puff of a cigar and then I know I would have a shot of booze.' I said to my son, 'I have to leave here.'"

He continued: "Since I got back, I've been going to meetings every day. It scares me. I hear all the time people say that they have another drink in them but they may not have another sobriety in them. I don't want to put myself in that situation. When I'm left to my own ways, I am going to come up with a stupid idea that makes sense at the time. I end up going, 'What the fuck is wrong with me, man?' People in their church, and kings and queens make mistakes because they are human. I've said the wrong things and I've done the wrong things, but I'm human. These days I just try not to make the same mistake twice.

"To be honest with you, I will think to myself, 'What the fuck was wrong with me when I thought a good night was getting a belly full of booze and bag of fucking cocaine?' You're sitting in a fucking hotel room, jacked to the gills and the sun is rising and you've got to do a gig that day. It's fucking dreadful. I've got no desire to do that stuff. When we discovered that fucking marching powder, it was the beginning of the end … but we came back with the No. 1 album and we are doing our farewell tour."

Ozzy admitted in a 2014 interview that that he hated attending Alcoholics Anonymous meetings and that he only went along for the sake of his family. He told The Sun newspaper: "Alcoholism is an illness. I don't like going to the meetings, but if I don't go, I know I will drink again. And I worry about losing everything, so I just don't want to drink anymore."

Osbourne in May denied that a relapse with his alcohol addiction had anything to do with his reported split with his wife Sharon. He told E! News: "I have been sober for three and a quarter years. I have not touched drugs or alcohol in that time. Any reports that I am not sober are completely inaccurate."

Ozzy and BLACK SABBATH will kick off a new round of North American tour dates on August 17 in Wantagh, New York as they continue their farewell tour.