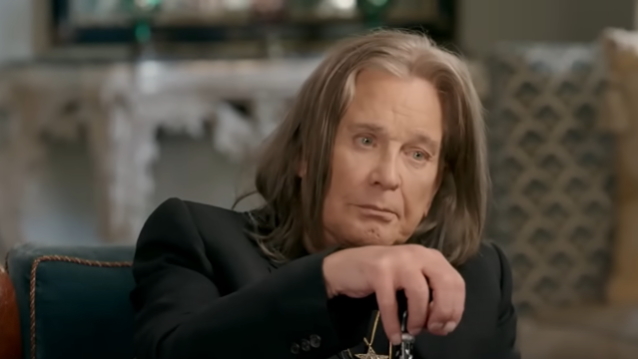 OZZY OSBOURNE Is Looking Forward To Touring Again: 'I Need To Get Back On That Stage'

Ozzy Osbourne spoke to Rock 95.5's "The Klinger Show" about his desire to return to the road after a number of health issues he has dealt with in recent years, including surgeries to treat a staph infection in 2018, the reveal of his Parkinson's disease diagnosis in 2019, a pneumonia battle that was followed by a fall at home in 2020 as well as a major neck surgery in June and a positive COVID-19 diagnosis. "That's what I'm heading for," he said. "I'm hoping I will feel well enough to tour. As soon as I'm finished with [doing] promotion [for my new album], I'm dying to get some physical exercise in and go all out to get myself back on my feet.

"It's different," he explained. "It's awkward right now. If I haven't got the confidence up, I'll lose my balance. So I've gotta get my confidence up. I've overcome drug addiction and alcohol addiction and tobacco. I'm sure I can give it a good effort. I need it; I need to get back on that stage."

Earlier in the month, the 73-year-old BLACK SABBATH frontman told Kerrang! magazine that he is focused on getting his physical health back to the point where he can manage being on tour again. "I am going to put 110 percent into getting myself out there. Time is my most valuable asset now. I'm 73. I don't think that I'll be here in another 25 years. I've got a goal: the goal is to get back onstage. I had my last surgery in June. I can't have any more. So whatever I make of it is entirely up to me now. Even if I manage one show, then fall over, [I'll have done it]. But I know that I'm going to carry on. I know I can beat it. I know that I can get back onstage. It's just that I've got to get off my butt and go for it."

Ozzy added he's working on getting his "rhythm again," admitting that "my balance is all fucked up, but I've got to keep going. I mean, I'll probably always have a limp. But I don't mind, as long as I can fuckin' walk around without falling on my head. I have a goal: that next summer I will be onstage. If I put every effort into it and I still can't, at least I can't say that I haven't tried."

As previously reported, Ozzy performed at halftime of the Los Angeles Rams season opener last Thursday (September 8) at SoFi Stadium. Fans in the stadium were treated to a multi-song medley from Osbourne while viewers at home saw a portion of the performance on NBC and Peacock during halftime.

The performance came on the eve of the release of "Patient Number 9", which arrived on Friday (September 9) on Epic. It marked Osbourne's first stateside performance since he took the stage alongside Post Malone and Travis Scott to perform their "Take What You Want" collaboration at the 2019 American Music Awards. Ozzy has not played a full concert since 2018.

Prior to the the halftime show, Ozzy last performed in August when he made a surprise appearance at the closing ceremony of the Commonwealth Games in his former hometown of Birmingham, England.