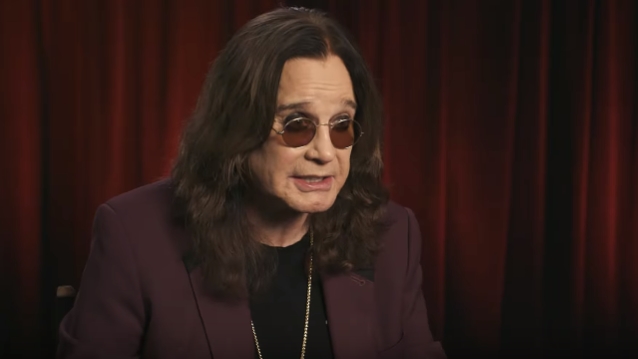 Prior to the upcoming first-ever Ozzfest New Year's Eve celebration, Rock And Roll Hall Of Fame inductee and Grammy Award-winning singer and songwriter Ozzy Osbourne sat down to talk about the festival created in his name.

Q: How you do feel about working through the holidays?

Ozzy: "I've always wanted to work through Christmas — it's a good start to the New Year. Ozzfest at the Forum, New Year's Eve, with us, two stages with [MARILYN] MANSON, ROB ZOMBIE, ZAKK SABBATH, ICE-T, a bunch of different people."

Q: This year's lineup features a lot of Ozzfest alumni.

Ozzy: "Yeah, that's the beauty of it — it's kind of like the all-stars of Ozzfest. That's one thing I'm really proud of, because of how this all started. Many years ago, when we tried to go on Lollapalooza and they said we don't have enough space for Ozzy and this kind of music. So we took a chance and did it all our own and it took off. And here we are, 21 years later. My God."

Q: There seems to be a real camaraderie among the hard rock world.

Ozzy: "You know, people look at heavy metal guys and they think, 'Oh, they're bad people.' But we're really not. I mean, if something bad happens, I'll get phone calls, 'Are you okay? Do you need any help?' This goes back years to even when Randy [Rhoads] got killed. I recently contacted Jonathan [Davis of KORN] after his wife passed away. It means a lot to support each other."

Q: Let's talk a little bit about Zakk and what it's like having him back out with you. On Ozzfest, he'll be pulling double-duty, performing on the second stage with ZAKK SABBATH and then with you for the final set of the night.

Ozzy: "It's good to have him back. Zakk's like a member of my family and it's a joy to work with him now that we're both sober. You know, he's the longest player — guitar player — I've ever had both with [BLACK] SABBATH and my solo gig.'

Q: What are you looking forward to with Ozzfest this year?

Ozzy: "I wanna give them a great show, I wanna have fun. I mean, I'm bringing the New Year in with a big bang!"

Q: And you'll be onstage when the New Year rings in?

Ozzy: "Yeah. i got to time it, because when you rehearse, you know, I'll play through songs. but then when you go on stage, you start to just go with it. We've got to time it so we can stop for the countdown."

Set for Monday, December 31 at The Forum in Los Angeles, Ozzfest will kick off 10 hours of live music at 2:30 p.m. with sets from ZAKK SABBATH, DEVILDRIVER and WEDNESDAY 13 on the outdoor stage. Everything shifts indoors at 6:00 p.m., where Ozzfest alumni ROB ZOMBIE, MARILYN MANSON, Jonathan Davis and BODY COUNT featuring Ice-T (in their Ozzfest debut) will take the stage. The night will conclude with a performance from Ozzy.

Tickets for the Live Nation-produced Ozzfest 2018 are on sale now here.

The Ozzfest lineup is as follows: