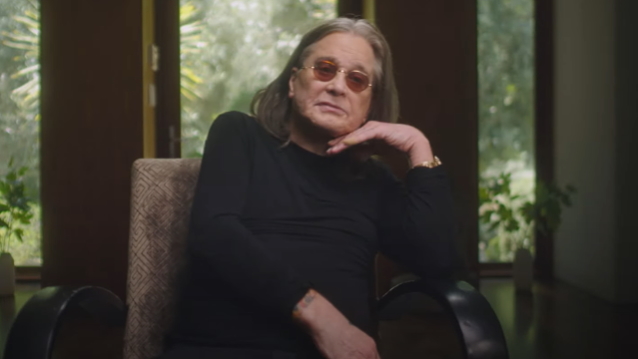 In a new interview with Stereogum, BLACK SABBATH singer Ozzy Osbourne reflected on the making of the band's final album, "13". Released in 2013, it was SABBATH's first LP in 35 years to feature Osbourne, guitarist Tony Iommi and bassist Geezer Butler. Asked if he still feels good about where "13" left things, he responded: "Not really, because, to be perfectly honest, I didn't really get a charge from the album. Although [producer] Rick Rubin is a good friend of mine, I wasn't really… I was just singing. It was like stepping back in time, but it wasn't a glorious period. Though Geezer [Butler, BLACK SABBATH bassist] did a lot of lyric writing for me, which he's very, very good at. It wasn't an earth-shattering experience for me."

As for whether BLACK SABBATH is "totally done" in his mind, Osbourne: "I would like to say it's completely done. I think it's time. The only thing I really regret, to be honest, is that Bill Ward [original BLACK SABBATH drummer] didn't play on the ['13'] album. It wasn't really a BLACK SABBATH album. I'm not saying that one day we might not all go in a room and come up with the perfect BLACK SABBATH album. But I'll say, ['13'] wasn't recorded the way BLACK SABBATH recorded records. We'd gone right back past the point where we took charge, back to when someone else had full control of our recording. Which we never did from 'Vol. 4' onwards."

This past April, Geezer spoke about Rubin's involvement with "13" during an appearance on SiriusXM's "Trunk Nation With Eddie Trunk" show. He said: "Some of [the '13' album] I liked, some of it I didn't like particularly. It was a weird experience, especially with being told to forget that you're a heavy metal band. That was the first thing [Rick] said to us. He played us our very first album, and he said, 'Cast your mind back to then when there was no such thing as heavy metal or anything like that, and pretend it's the follow-up album to that,' which is a ridiculous thing to think."

When host Eddie Trunk noted that many other artists who have worked with Rubin walked away from the experience feeling a bit underwhelmed, Butler said: "I still don't know what he did. It's, like, 'Yeah, that's good.' 'No, don't do that.' And you go, 'Why?' [And he'd say], 'Just don't do it.' I think Ozzy one day went nuts 'cause he'd done, like, 10 different vocals, and Rick kept saying, 'Yeah, that's great, but do another one.' And Ozzy was, like, 'If it's great, why am I doing another one?' He just lost it. And that's the way it was. Tony wasn't happy with some of the stuff he was trying to make him play. He was making Tony get 1968 amps — as if that's gonna make it sound like back in 1968. It's mad. But it's good for publicity and it's good for the record company. If you've got Rick Rubin involved, then it must be good, kind of thing."

In an official documentary chronicling the making of the "13" album, Geezer was more complimentary about collaborating with Rubin, saying: "It's great with Rick Rubin in charge. He's got a great track record and he comes up with some great ideas. Some work, some don't, but it's worth trying."

When Iommi was asked about working with Rubin in a 2013 interview with Guitar Player magazine, he said: "It was fine once we got used to him. We didn't know how he was going to work, because through the writing period, we didn't see a lot of him. He'd say, 'Phone me up when you've got an idea and I'll come down.' So we'd have a track together and phone him up or e-mail him, and then he'd come down and say, 'Yeah, I like this part, but I don't like that part' or 'I like everything,' whatever it may be, and then he'd go. He was only there perhaps ten or 15 minutes at the most. We didn't know how he was going to approach recording. It was all a bit of a mystery to us… It's sort of left to the last minute, and then he throws it at you. He just pushes that much more, and that's difficult for a band like us. We've been around so long, it's hard to accept criticism from somebody we've never worked with. But we did, and it was good. It was really good. We might be working on a track, and he'd go, 'Oh no, it doesn't feel right. Try it again and try extending that part.' So we'd do it and then we'd be thinking to ourselves that it may be too long, but we'd do it anyway. And then he'd go, 'That doesn't feel right. Let's try another one.' And then he'd say, 'Okay I think we've got it, but do you want to just try another one?' So we would try another one, and he'd say, 'Okay, let's leave it now.' So we never knew exactly which one he was going to pick."

Asked in a 2021 interview with SPIN if he had learned anything from working with Rubin, Iommi quipped: "Yeah, I learned how to lie on the couch with a mic in my hand and say 'Next!' ... It was just different, the way he works. He wanted to find the original SABBATH sound. He said, 'Have you got your original amps?' I said, 'Rick, that was 50 years ago. Do you have any amps from 50 years ago? … I don't have them, they've blown up. They're gone long ago. I've got my own amps now.' He said, 'No, we need the old stuff.'

"So, I get to the studio, and there are 20 different bloody amps there. He goes, 'They're vintage amps.' I said, 'That doesn't mean they sound good; they're just old.' He went, 'Well, let's try them.' I tried them, and I didn't like any of them.

"So it was a bit of a backwards and forwards till he got used to me, and I got used to him, really," Iommi added. "But we did it, and the album was very basic. I'd done a lot of the songs from the last album in my studio at home. I thought the sound was better, to be honest. But there was more stuff involved; I put more instruments on it. He just wanted it very bare and very basic, which you know, was good."

Ward in May 2012 announced that he was declining to join his former SABBATH bandmates for its scheduled dates, as well as the recording of the new album, due to a contractual dispute. After SABBATH shot down Rubin's suggestion to replace Ward with Ginger Baker (CREAM) ("I thought, 'Bloody hell?'" Iommi told Rolling Stone magazine. "I just couldn't see that."),Rick suggested RAGE AGAINST THE MACHINE drummer Brad Wilk.