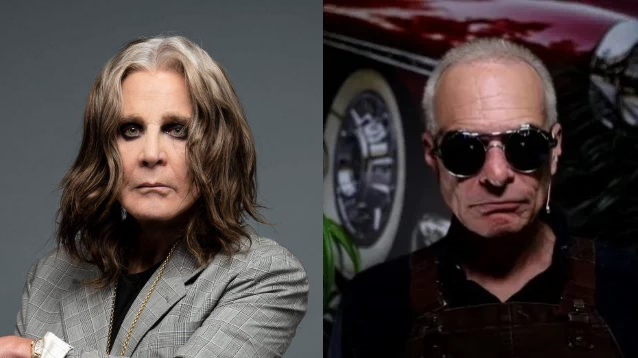 In a new interview with Revolver, Ozzy Osbourne recalled when VAN HALEN opened for BLACK SABBATH in 1978 on the European leg of the latter band's "Never Say Die!" tour.

"[Eddie Van Halen] was such a great guy. They came to our local pub and it was good fun," recalled Osbourne. "But David Lee Roth, he's lost a couple of nuts and bolts. When you meet him, it's like, 'What's wrong with him?' He's like somewhere else, you know?"

"They were arch enemies," Ozzy remembers. "Randy didn't have a lot to say about Eddie. They were very, very similar guitar players. Eddie took that tapping thing to another level. Randy could do that, but he liked people like Leslie West.

"It amazes me that you get Eddie, you get Randy, and you go, 'No one's ever gonna top that.' But there's a new thing round every corner."

Rhoads's pre-Ozzy band QUIET RIOT had been gigging on the Sunset Strip in West Hollywood, California at the same time as VAN HALEN. Although both Rhoads and Van Halen later became some of the most influential guitarists of the 20th century, playing with a similar flare and incorporating finger-tapping into their fleet-fingered solos, Eddie found commercial success before Rhoads, due in part to the fact that VAN HALEN landed a record deal years before QUIET RIOT did.

The rivalry between Rhoads and Van Halen was explored in the documentary "Randy Rhoads: Reflections Of A Guitar Icon", which was released this past May. The film contains archive audio of Van Halen discussing Rhoads, saying, "He was one guitarist who was honest, anyway. Because he said everything he did he learned from me.

"He was good," Van Halen continued. "But I don't really think he did anything that I haven't done. And there ain't nothing wrong with it. I've copied some other people, you know?"