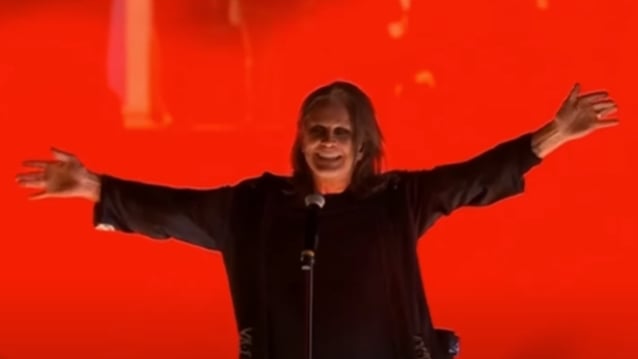 Sharon Osbourne has opened up about Ozzy Osbourne's surprise performance at the closing of the Commonwealth Games in his original hometown Birmingham, England on Monday night (August 8). The BLACK SABBATH icon made a surprise appearance at the Games, declaring "Birmingham forever" as fireworks erupted. Ozzy performed "Paranoid", with BLACK SABBATH guitarist Tony Iommi and two musicians from the band's final tour, Adam Wakeman, who played bass and keyboards, and drummer Tommy Clufetos, also on stage.

Sharon spoke about her husband's appearance at the Games on Talk TV, telling the channel: "They asked us six months ago, and Ozzy couldn't possibly have done it till after his last operation. They saw Ozzy was at Comic-Con and they said, 'All right. Come on. Get him over.' And we were, like, 'All right.' And literally it was six days from their phone call to getting him there. It was just incredible."

Sharon also branded Ozzy a "born performer", saying: "He is very organic with everything. He is, and always will be, a working-class hero. He hasn't changed one inch."

Sharon added: "It is a great city with great people. I watched it in the front — I watched it at the front with the kids in the wheelchairs. It was just amazing. If you try hard enough, and you believe in yourself, you can get there. Kelly [Sharon and Ozzy's daughter] was there as well. fully pregnant — and the baby was kick, kick kicking because it was so loud!"

Sharon went on to praise Birmingham's friendliness and warmth, saying: "I have to tell you, a lot of people were in tears of joy. Just respect for [Ozzy]. We checked into a wonderful hotel which took care of us, and the girls showing us up to our room were all crying."

She said: "He's not a rocker with an island somewhere. He has always loved Birmingham."

A few years ago, Ozzy said that he was open to the possibility of a SABBATH reunion at the Commonwealth Games, telling ITV that it "would be fantastic" to play at the the opening ceremony for the 2022 Games. "With BLACK SABBATH or on my own," he said at the time.