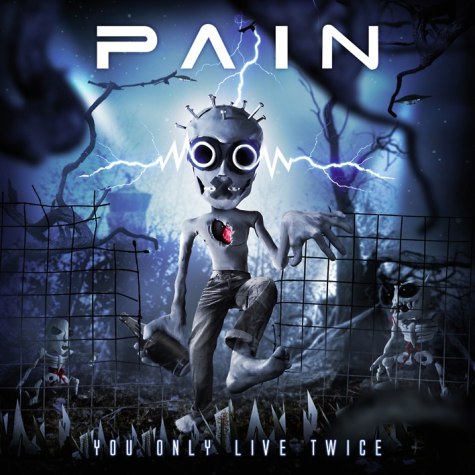 PAIN, the Swedish industrial metal outfit led by musician and producer Peter Tägtgren, will release its seventh album, "You Only Live Twice", on June 3 via Nuclear Blast Records.

Commented Tägtgren: "I really wanted something 'Nightmare Before Christmas' meets 'Alice In Wonderland' kind of feeling but with our mascot, the Painhead in it. And Heile created that after what I wanted. And he did it in his own way. It really has this kinda Tim Burton feel to it. It will be really crazy with a big backdrop. We also gonna do some inflatable stuff with our Painhead. Its gonna be our Eddie, like IRON MAIDEN has it."

Regarding the album title, Tägtgren previously stated, "[The title] has nothing to do with James Bond. I am sure I will hear this for the rest of my life! The title song is mainly about people struggling.

"Don't you wish you had another chance? Don't you wanna live twice? Like you're always jealous of other people. How good their life is or they won on lotto or anything. It's about jealousy in general towards other people that surrounds you. About not being satisfied with what you have. Trying to create this fantasy world that you can live twice kind of…"

Kaaos TV conducted an interview with Tägtgren on February 18 at Sonic Pump Studios in Helsinki, Finland. When asked how "You Only Live Twice" compares to the group's previous releases, Peter said, "It's definitely got more variety, and it's heavier and darker... I just wanted to pull it a little bit heavier. I don't know why. When you do things sometimes, you don't have a reason; it just feels like it. It's really hard to explain."

The follow-up to 2008's "Cynic Paradise", "You Only Live Twice" was recently described by NIGHTWISH singer Anette Olzon — who also happens to be the girlfriend of PAIN bassist Johan Husgafvel — as "more aggressive" and "faster" than the band's previous work, with "new elements they haven't used before." She also called the CD "darker" in terms of Peter's lyrical and vocal approach before adding, "One song is more like HYPOCRISY, so if you like that you'll have that one as a favorite."

She continued, "When I first heard the songs I thought it was quite different from the last album and it is. The more I listen to the songs the more I like them and I think it will be a great one! I can see them do their famous headspins live to this album, too."