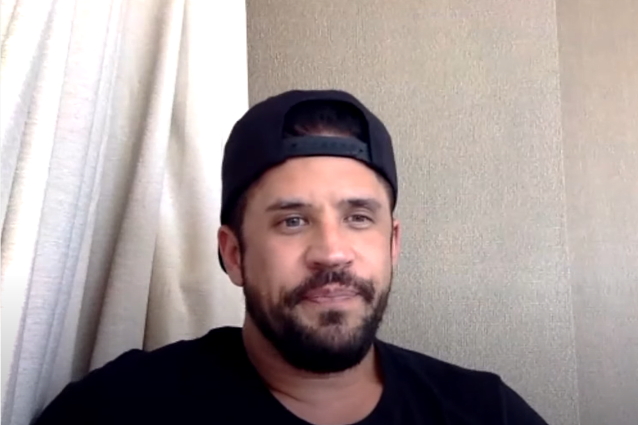 In a new interview with Hannah Trigwell of Thomann Music, PAPA ROACH bassist and songwriter Tobin Esperance was asked if he and his bandmates ever get nervous about how each of their new albums is going to be received by their fans. He responded (as transcribed by BLABBERMOUTH.NET): "Maybe when it's time for it to be released, 'cause you know you have to prepare yourselves for all the stupid reviews and comments. We've been through this so many times, we don't really give a fuck. Honestly, at this point, it boils down to how we feel about it. Like, how much fun did we have fun making it? How real and honest and true was it? Not everyone's gonna get it — we know that — but while we were making it, we were feeling it, we were loving it, we were on an adventure. And so there's always that little bit of nervous energy that happens right around the release, but then it goes away."

The seeds of "Ego Trip" were planted when the quartet entered a COVID-secure mansion in Temecula, California in the summer of 2020. What started as an escape and an exercise in keeping the creative juices flowing, in a world that had completely ground to a halt, quickly grew into something bigger. Purposeful, provocative, and just the right side of the line between confident and cocky, "Ego Trip" is PAPA ROACH — completed by guitarist Jerry Horton, vocalist Jacoby Shaddix and drummer Tony Palermo — at its boldest and most brilliant.