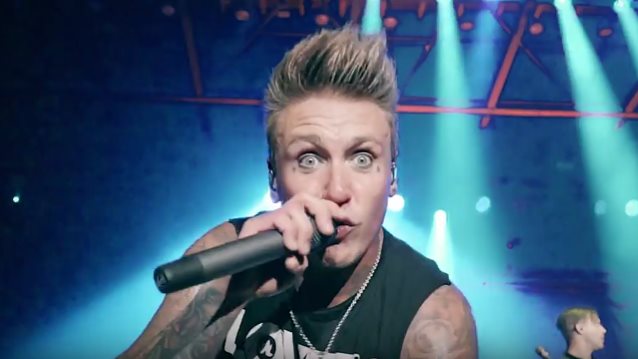 PAPA ROACH has canceled its previously announced shows in the Oregon, Illinois and Alaska so that singer Jacoby Shaddix can undergo vocal cord surgery.

Says the band in a statement: "This week, Jacoby was advised by his doctors and vocal specialists to have surgery on his vocal cord and to give his vocal muscles enough time to heal before PAPA ROACH resumes their current touring schedule in September. Jacoby had a similar surgery about five years ago. Fortunately, the diagnosis was made early and full recovery should be soon.

"The vocal cords are a muscle and like any athlete, muscles can get injured in the course of their profession and we appreciate your understanding this diagnosis.

"We wish to thank all of our fans in advance for your prayers and good wishes. We know some of you had travel plans and we will return next year to perform for you."

Meanwhile, Shaddix has tweeted a photo of him resting in a hospital bed. He wrote in an accompanying message: "Just want to say thanks for all the kind words and well wishes from all my friends, family and fans. It means a lot. I will recover. I will…"

Back in 2012, Shaddix had surgery to remove a nodule on his vocal cord. Shaddix was diagnosed earlier that summer and initially attempted to take care of it without an operation.

Describing the problem to Rolling Stone magazine at the time, Shaddix said: "It's called a nodule, otherwise known as a node, and it sits on the vocal cord. It's pretty much like a callus that you get on your hand, but it's like a callus on your vocal cord, so it affects my speaking voice, my singing voice.

"I first noticed it towards the end of recording of our [2012 album 'The Connection']. At the end of the day, I was super hoarse and then the next day, I'd wake up all backed up and I could barely talk. We were in the studio until a few days before we went out on the road and that's when it put a nail in it. We went and did this run in June and I was like, 'Fuck, what's going on with my voice? I'm not smoking cigarettes, I'm not fucking partying, I'm fucking the healthiest I've been and this pops up.' I'm all freaked out."

Shaddix told Rolling Stone five years ago that his vocal cord problem was caused by "all the stresses in your life, whether they be emotional, physical, sleep deprivation or just overuse. I got clean and sober and I was getting my life together, [then] me and my wife split up and that just flipped my whole entire world upside down. I wasn't sleeping, I wasn't eating, I was wigging out. And all the while I was sober going through this shit... and I was singing six, seven hours a day. That by itself can cause the issue that I have."

PAPA ROACH has spent the last few months touring in support of its ninth studio album, "Crooked Teeth", which was released on May 19 via Eleven Seven Music.

Just want to say thanks for all the kind words and well wishes from all my friends, family and fans. It means a lot. I will recover. I will… pic.twitter.com/15jqM1wBxz