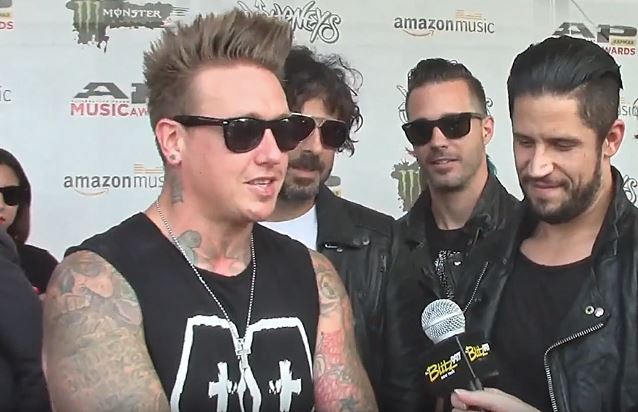 California rockers PAPA ROACH are putting the finishing touches on their ninth album, tentatively due in early 2017. A single will precede the effort at the end of the summer or early fall.

Speaking to Ronni of the 99.7 The Blitz radio station at this past Monday's (July 18) Alternative Press Music Awards at the Schottenstein Center in Columbus, Ohio, PAPA ROACH bassist Tobin Esperance stated about the follow-up to 2015's "F.E.A.R.": "We're really excited about the new record. It's actually being finished right now. As soon as we finish this performance [at the awards show] tonight, then we go back and just tighten up loose ends. But it has got a lot of energy. It's old-school P-ROACH to its truest form, and it's also got an adventurous side to it. There's a lot of surprises. There's a lot of big beats. The message is strong."

PAPA ROACH also revealed that it will hit the road extensively in support of the new album in 2017. Singer Jacoby Shaddix said: "Next year we've got a tour planned with another band, a co-headliner. We cannot announce it yet, but it's gonna be big as fuck. It's gonna be amazing. So I think rock fans will be very excited about what we're putting together."

"F.E.A.R." spawned two hits at radio with "Face Everything And Rise", which reached #1 on the Active Rock Chart, and "Gravity", which peaked at #5, landing the band as the #8 "Most Played Active Artist" of 2015.

"F.E.A.R." came out in January 2015. The disc was recorded in Las Vegas, taking the band out of their Sacramento, California home base for the first time since 2006. PAPA ROACH worked with the father-and-son producing team of Kevin and Kane Churko on the new CD.