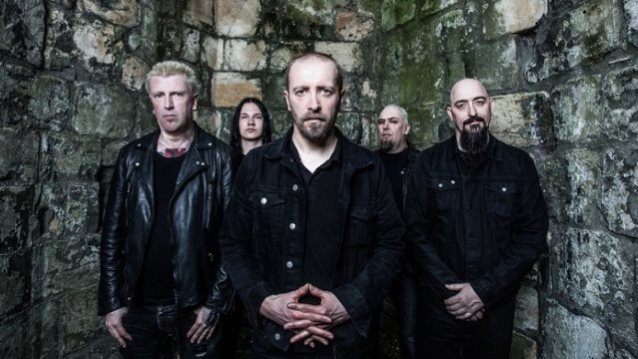 PARADISE LOST: Vinyl Reissues And 'Live At The Roundhouse' Due In September

Century Media Records will reissue the essential studio albums "In Requiem" (2007),"Faith Divides Us - Death Unites Us" (2009) and "Tragic Idol" (2012) by U.K. gothic metal pioneers PARADISE LOST as high-class vinyl editions in September. Furthermore, the band's twenty-fifth-anniversary show recorded in London on November 3, 2013 by Abbey Road Live is going to be released on vinyl as a one-time-only pressing too.

Previously, "Live At The Roundhouse" was released as 2x CDR and digital album under the title "Tragic Illusion Live At The Roundhouse, London" offering a career-spanning setlist and authentic, honest live sound due to being recorded and mixed on the fly. The vinyl's front cover was created by Valnoir and is based on a shirt design originally offered at this unforgettable show back in 2013.

"Live At The Roundhouse" and all album reissues have been mastered for vinyl by Patrick W. Engel of Temple Of Disharmony (ICED EARTH, TIAMAT, MOONSPELL) and feature 180-gram vinyl and gatefold sleeves.

See below for limitations and release dates:

The limited colored vinyls can be ordered via CMDistro.de.

"Live At The Roundhouse" vinyl plus t-shirt bundles are available via the band's store.

The regular black vinyl and colored "In Requiem" repress are distributed internationally by Sony Music (excluding North America, Canada, Mexico) and can be obtained at all usual outlets.