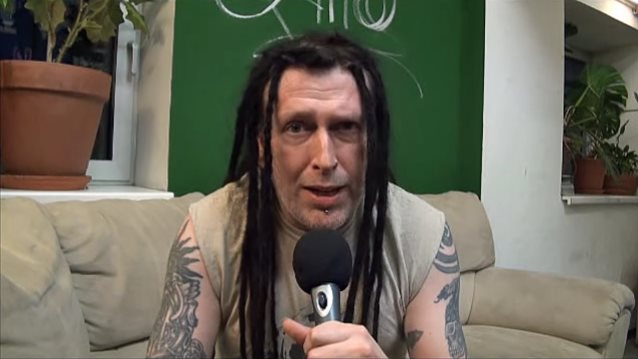 PARADISE LOST's GREG MACKINTOSH: I'd Prefer People Downloaded Our Records For Nothing Than Got Them From SPOTIFY

During a brand new question-and-answer session with asQme, guitarist Greg Mackintosh of British gothic metal pioneers PARADISE LOST was asked how he sees the music industry evolving in the next ten years. He responded: "Well, it's obviously gonna progress with the online downloading thing now that Apple have adopted a Spotify type of [streaming] scenario."

He continued: "Personally, I'd prefer people downloaded our records for nothing than actually got them from Spotify, because Spotify only really benefits the few people that run it, and I can probably see the Apple thing going pretty much the same way. On the plus side, it seems that there's been a real resurgence in the vinyl market, with the reintroduction of vinyl chart coming back as well. And I know my son, for instance, is really into physical product, and he's, like, just turned 18, so that's quite… it gives you some confidence for the future."

He added: "So it's probably gonna go in two directions at first, and then there'll be some kind of… I don't know… other format that maybe comes along that decimates them both. But I guess we'll just wait and see. I'm not really a very good soothsayer when it comes to that."

Mackintosh last year spoke in more detail about how the Internet and digital music revolution has affected the music industry. He told Metal Road "It's kind of killed it a little bit, because there is no money for the industry. I don't mean for the bands — I mean, just in the industry, there's no money — so there's not as much for tour support, things like that, or promotion, so everyone kind of has to do extra things which you wouldn't normally want to do. Even just like the packaging of an album, you have to do 20 different formats just to try to sell it to people. It leaves a bit of a sour taste in my mouth. We started in the music scene when it was more honest, shall we say?! But, I mean, there's plus points to the way it is now. People get to hear things faster, people get to promote things instantly. We don't have to rehearse as much, 'cause we just send each other things over the Internet."

PARADISE LOST's latest album, "The Plague Within", was released on June 2 (one day earlier internationally) via Century Media.