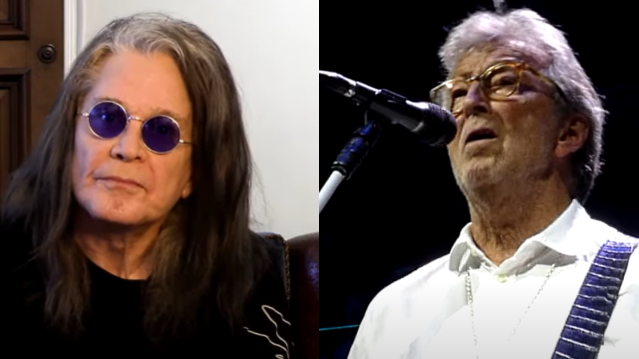 'Paranoid' OZZY OSBOURNE Once Believed ERIC CLAPTON Was Following Him Around

Tonight, Ozzy Osbourne will world premiere another new song called "Degradation Rules" from his upcoming album, "Patient Number 9", on the latest episode of "Ozzy Speaks" on SiriusXM's Ozzy's Boneyard. During the one-hour show hosted by Ozzy and close friend/musician Billy Morrison, they discuss the new song and album, and Ozzy also shares a story about running into legendary guitarist Eric Clapton at AA meetings in Los Angeles.

Ozzy said: "Many, many years ago, me and Sharon [Osbourne, Ozzy's wife/manager] were in New York and we had to go to an award show. Everybody was there. And I was still doing drugs and alcohol and I was freaked out. So, we go to this award show and afterwards there's me, Grace Jones, that chick I did the award show with. Me, Grace Jones, and I wanted a picture of Eric Clapton, me and Grace Jones together. I thought, 'He's gonna think I'm a…' And he'd just come out of some place. So, he was freaked out, which I didn't know. And I'd convinced myself that he was gonna stop this photograph from being [released]; I'd never seen it for the longest time. And then I went to an AA meeting in the valley many years later; it was like 10 years later. I turn around in this AA meeting and there at the back was Eric Clapton sitting there. And I'm, like, 'Fucking hell.' … I'm thinking, 'He still remembers.' Not thinking of what he's done in the last 10 years. ... I'm thinking, 'All he's done, he's still thinking how much he hates me.' … So I'm thinking, 'At the end of the meeting, I'm gonna go out that door. I'm fucking legging this.' … I'm thinking, 'He hates me. He's gonna call me the biggest cunt he ever met.' So, I'm just going back to cross the road. I'll get in the car and drive off.' A couple weeks later, I go again. There he is again. I'm thinking, 'This fucking guy…' … Yeah. I'm paranoid as fuck. So, I'm just about to cross the road and get in my car and drive off. He goes, 'Ozzy.' I go, 'Here we go.' And he goes, 'Good to see you in the room.' We had a chat and I thought, 'Wow, what a nice guy.' The fucking next week, I go to a music stand and that photograph [from the award show] was in the magazine, the first magazine I picked up."

The full episode of "Ozzy Speaks" will air tonight at 11:45 p.m. EDT on SiriusXM's Ozzy's Boneyard, with encores all weekend long. The program is also available on the SXM App.

Working with producer Andrew Watt for the second time, Ozzy welcomed a dynamic A-list supporting cast for "Patient Number 9". The record boasts guitarists Beck, Clapton, Mike McCready (PEARL JAM) and longstanding righthand man and six-string beast Zakk Wylde who plays on the majority of the tracks. For the bulk of the album, Chad Smith of RED HOT CHILI PEPPERS held down drums, while the late Taylor Hawkins of FOO FIGHTERS made an appearance. Old friend and one-time Ozzy bandmember Robert Trujillo of METALLICA plays bass on most of the album's tracks, with Duff McKagan of GUNS N' ROSES and Chris Chaney of JANE'S ADDICTION supplying bass on a few songs. For the first time ever, BLACK SABBATH co-founder, guitarist, and riff-lord Tony Iommi appears on an Ozzy solo album.