PARKWAY DRIVE will set stages afire with their full pyro production show on their largest headlining tour to date in North America beginning May 8 in Baltimore, Maryland. HATEBREED and THE BLACK DAHLIA MURDER will support the tour with STICK TO YOUR GUNS on select dates. The tour will also include appearances at Welcome To Rockville and So What festivals.

* No STICK TO YOUR GUNS

In 2020 band released the documentary "Viva The Underdogs", which features over a decade of behind the scenes personal footage, coupled with unprecedented access to the band's most explosive live tours and world's biggest music festivals. The soundtrack for the documentary was released in the same year. Featuring 11 live tracks from the band's 2019 headlining set at German heavy metal festival Wacken Open Air, the soundtrack also includes three studio tracks recorded in German: "Würgegriff (Vice Grip)" , "Die Leere (The Void)" and "Schattenboxen (Shadow Boxing)" which features German rapper Casper. 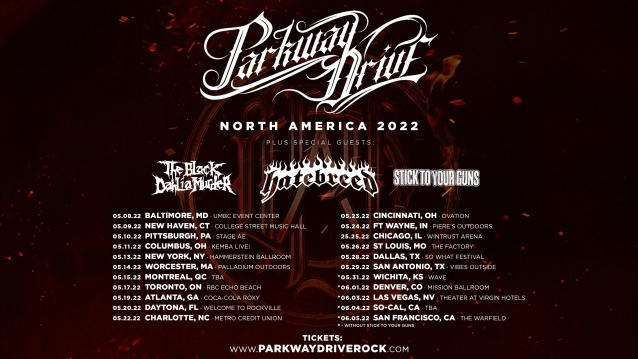