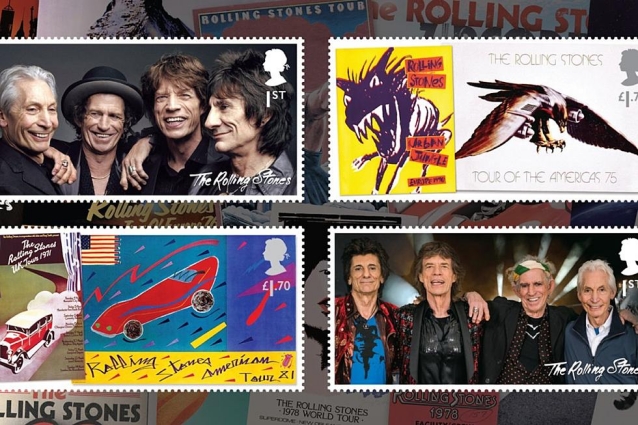 THE ROLLING STONES will be honored with a set of 12 stamps to mark the band's 60th anniversary.

Later this month, Royal Mail will issue the stamps, eight of which will feature images of THE ROLLING STONES' most famous performances, including 1969 in London's Hyde Park, a 1995 concert in Rotterdam, and a gig at the 1976 Knebworth Festival. Four more stamps will be available in miniature sheet format, featuring two photos of the band together and two of their worldwide tour posters.

David Gold, Royal Mail's director of public affairs and policy, said: "Few bands in the history of rock have managed to carve out a career as rich and expansive as that of THE ROLLING STONES. They have created some of modern music's most iconic and inspirational albums, with groundbreaking live performances to match."

"In 2005, THE ROLLING STONES were awarded the accolade of greatest touring band of all time at the World Music Awards," the press release announcing the stamps added. "They have sold an estimated 250 million records and in the U.K. have eight no.1 singles and 13 No. 1 albums. Their countless awards include four Grammys, three MTV Music Awards and nine NME Awards. They were inducted into the Rock And Roll Hall Of Fame in 1989.

"Since they began as a group," the announcement continued, "their singles and albums have produced a string of evergreen rock classics, powered by some of the greatest guitar riffs ever written."

Last year, THE STONES resumed their "No Filter" tour in the U.S., marking the first time they have performed without founding drummer Charlie Watts, who died in August at the age of 80.

THE ROLLING STONES are the fourth band to be honored in a dedicated stamp issue, following THE BEATLES in 2007, PINK FLOYD in 2016, and QUEEN in 2020.

The stamps, which were created in close collaboration with THE ROLLING STONES members Sir Mick Jagger, Ronnie Wood and Keith Richards, will go on sale from January 20.