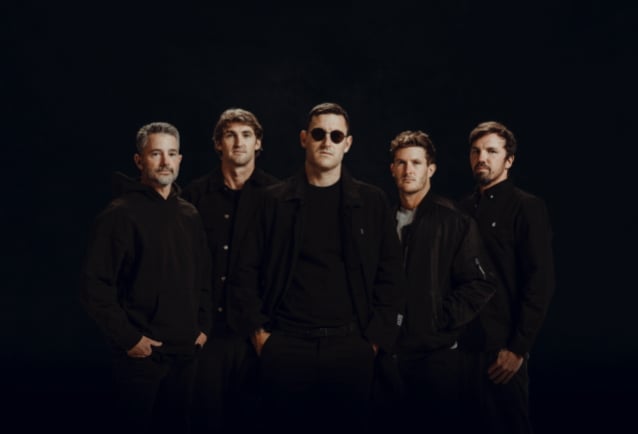 Australian juggernauts PARKWAY DRIVE have steadily evolved from metal underdogs to festival-headlining behemoth, off the back of close to 20 grueling years, six critically and commercially acclaimed studio albums (all of which achieved gold status in their home nation),three documentaries, one live album, nearly a billion total streams, and many, many thousands of shows. Today, they have shared the video for the brand new single "Glitch". The song explores the things that our minds experience when we are not awake — but not yet asleep — the world of night terrors and sleep paralysis. It also marks the first new material from the band since 2018's "Reverence" album.

"PARKWAY DRIVE have always walked the line of balancing the light and the dark, and 'Glitch' is no exception," the band shares. "Sonically, we aimed to create a dark, heavy, and unnerving journey while still crafting a melody that burrows its way into your mind. Lyrically, the song deals with the phenomenon of night terrors and sleep paralysis. We all know the power our minds possess, but true terror manifests when your mind and all its fears takes physical control of your body. The glitch in your brain, where nightmares and reality cross."

Two years ago, PARKWAY DRIVE vocalist Winston McCall confirmed to Knotfest.com that he and his bandmates were using their coronavirus downtime to work on material for the follow-up to "Reverence". Asked what specifically has been inspiring his vocal and lyrical approach for the new PARKWAY DRIVE music, McCall said: "Everything, to be honest. It's very interesting sitting back and allowing, I guess, random thought to drive the actual sound and following that thread. Because when you're constantly on the road, you're constantly in this media-driven… We're bombarded with sounds and everything going on within the world, I think it's taken something like this [coronavirus crisis] to realize the amount of stimulation we have. So when it's taken away, it gives you kind of an idea to be able to trace where thought patterns are coming from… It's literally just, 'Why is my brain attracted to this beat? Why is my brain attracted to this style of vocals? What sound is driving me with this?' and then following those patterns… I think it's trying to find a more primal connection to the actual music."

The documentary "Viva The Underdogs" features over a decade of behind-the-scenes personal footage, coupled with unprecedented access to the band's most explosive live tours and world's biggest music festivals. The film gives an incredibly honest and candid look at PARKWAY DRIVE's 15-year underdog journey; the good times, battles, triumphs, and sacrifices.