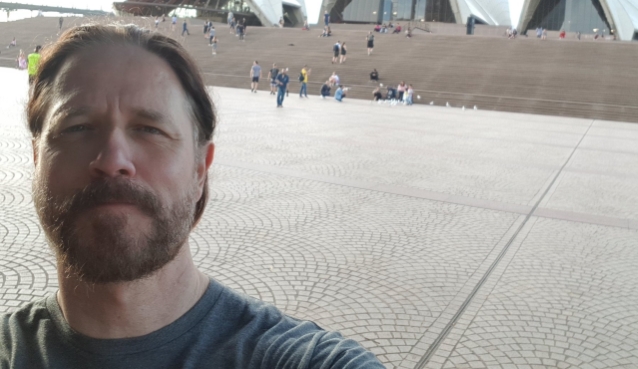 Guitarist Patrik Jensen (THE HAUNTED, WITCHERY) recently spoke with Jake Patton of Metal Wani. The full conversation can be streamed below. A few excerpts follow (as transcribed by BLABBERMOUTH.NET).

On AT THE GATES' Australian tour, which will see Jensen doing double duty with openers THE HAUNTED and WITCHERY:

Patrik: "Every time I've been down to Australia with THE HAUNTED, a lot of people ask me about WITCHERY — 'When are you coming down with WITCHERY?' Because members are in different bands, it's always been a problem. It's actually a problem just to get the guys to rehearse and record an an album. That's sometimes why there's several years in between albums. We've been lucky these past few years that we've been able to put out two albums. Now, finally, the stars align. We won't have everyone in the band with us, but we have great people that will step in. Everyone is excited... It's especially cool to get on this tour, because we share members — members of THE HAUNTED are also in AT THE GATES, and so on. It's just a bunch of old friends — kind of like friends doing a trip together and having fun and going to a great country and playing music. It's going to be a fantastic trip on all accounts."

On whether it's "daunting" to know that he'll be playing eight sets in four nights during the tour:

Patrik: "Back in 2001, THE HAUNTED was to do a U.S. tour. I think it was October, so it was a month after 9/11. The opening band couldn't make it for some reason, so WITCHERY jumped on the tour, so for a month, I did 60 shows in 30 days. That was one-hour sets for each band, and that went fine, so I think it will be fine this time around too."

On whether it's difficult to endure extensive traveling with two internationally active bands:

Patrik: "I love to travel. That was one of my main goals with touring — to get to see the world. There's many different reasons to why people like touring — to get away from home, or to just be able to drink every day, or only focus on playing music. I love playing music, of course, but I love to travel. I get up at 9 in the morning [while on tour] and I go out and see the city where I am. I've probably been to every cathedral and all the sightseeing stuff in every European city, and in the U.S. If you have that curiosity about the world, touring is great. Touring has never been a problem for me — it's always been an exciting journey."

On continuing to be excited about making music:

Patrik: "To keep the interest for music alive, I think you either have it or you don't have it... If you have the love for music, the passion for music, it will stick with you. If you're in it for any other reason, that interest will fade, but people that keep going year after year, they're in it for the music."

On when to expect new music from WITCHERY:

Patrik: "I just got off my other computer — my music-recording computer — and I have nine songs ready for the next album, so the new WITCHERY album [will be released] hopefully this year, but [if not], definitely next year... We're going to record it again with Daniel Bergstrand, [who] we did the two last albums with, because he really knows how to get a great sound for the band."

On the difficulties of coordinating schedules to make a new WITCHERY album:

Patrik: "Many people in WITCHERY are full-time musicians, so they need to do their day job, so to say. You can't really say, 'Oh, we have a WITCHERY gig, so you can't go off and play with the band that pays the bills,' so we've always had to take that into consideration. We had Martin Axenrot on drums for a long time. He's in OPETH, and OPETH is a very busy band. ARCH ENEMY [the primary group of bassist Sharlee D'Angelo] is a very busy band. That might be one of the reasons why there was such a long period without any albums, because all our bands were just so active. When Martin stepped aside and we got Chris [Barkensjö] in the band on drums, all of a sudden, we had a lot more time to rehearse and to write music. That's why we are now back on track and releasing albums on a more regular basis."

AT THE GATES' four-date Australian tour with WITCHERY and THE HAUNTED — billed as "The Ultimate Triple Bill Kill" tour — kicked off April 25 in Brisbane.