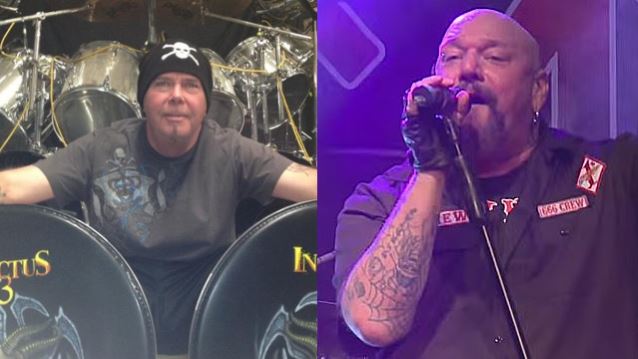 PAUL DI'ANNO 'Had More Opportunities In The Music Business Than Just About Anybody Else,' Says Former Bandmate SID FALCK

Drummer Sid Falck has slammed his former bandmate Paul Di'Anno, explaining that the ex-IRON MAIDEN singer has "had more opportunities in the music business than just about anybody else" to return to his former glories.

Falck played in Di'Anno's BATTLEZONE for around three years in the mid-1980s before leaving the band and joining OVERKILL. He exited the latter group in 1992 and disappeared from the music business for more than twenty years until two years ago, when he announced the formation of a new "power groove metal" project called INFECTUS 13.

Asked during an appearance on a recent edition of the "Thunder Underground" podcast if Di'Anno was as self-destructive back in the 1980s as the press made him out to seem, Falck said: "Paul is, and was, one of the most unique voices in the New Wave Of British Heavy Metal, and probably just metal in general. He was not high pitched, he was kind of lower register. Back then, if you even could take away the music part of it, which obviously gave away completely who you were listening to, but if you only had the vocals, you would still know, 'This is IRON MAIDEN.' 'Cause it was very unique and different. That's Paul.

"In my opinion, he could have gone anywhere he wanted — literally. He could have even passed MAIDEN. He could have done anything he wanted if he had done it for the right reasons. [After] the whole MAIDEN thing, the first thing he did was the band DI'ANNO, which was just called DI'ANNO, and it was like fucking listening to JOURNEY. It's very, very JOURNEY, it's like AOR, it's very commercial — trying to be.

"Paul's voice is not for fucking JOURNEY, all right? It does not fit. But that was what he wanted because he was very impulsive."

He continued: "I played with Paul from '84 to '87. I left after a U.S. tour in '87. He was very self-destructive. It was nuts — I mean, from start to finish. And he wasn't the only one; he's just the one that had the bigger name, obviously. And I haven't talked to Paul since '87. I read some of the shit he said, and I'm not gonna touch it. And I was not very nice after I left. When I first joined OVERKILL, some of the first interviews, obviously, had a lot of questions for me about Di'Anno, because it was fucking Paul Di'Anno. And I wasn't nice. I didn't leave on good terms. In retrospect, was that the right thing [to do]? Probably not. First of all, you left, so who gives a fuck? Why even talk about it. But you say shit, he [said] shit.

"I think [Paul has] had more opportunities in the music business than just about anybody else to get back on what he could have done. I think he's had more chances. Why, I don't know. I mean, how many projects and bands has he been involved with since BATTLEZONE that have gotten so much attention? And yet every single one of them went down the same road. How many people do you know that get that many chances, especially in a business where, like David Lee Roth said, 'Here today, gone later today.' I mean, I don't know anybody that has gotten that many shots of getting right. So he was very self-destructive, but he wasn't the only one in BATTLEZONE — trust me. But he was the one that got all the attention, because he was a name; the rest of us [weren't].

"I don't know what he's like today; I have no idea. From what I'm seeing, when I do see shit [online], I don't know that he's changed. I hope he has. I mean, like anybody else, he's a human. We all have different ways of being human, I guess, is the easiest way to say it. Whatever he's choosing, I'm hoping it works for him. And I hope he's cool with it. I mean, I stopped drinking and doing drugs 23 years ago. I haven't done anything since August 22, 1992. This is it: coffee and cigarettes. That's it. Seriously. From what I understand, he's still not gotten to that point, and that's his prerogative not to get to that point. I quit for me. I quit because I had to. It was just not right anymore. It was out of control. Had I not quit, I would have been dead."

Falck went on to say: "I don't know what he's like now. Back then, [in] the '80s, yeah, he was very self-destructive. He caused a lot of his own problems by not knowing when to stop. But I can't look down on it, because I was worse. I mean, I knew when to stop and chose not to. I was smart enough to know, 'Dude, you're on the wrong path, son. You're gonna really fuck up soon.' But I didn't give a fuck. I don't know if his thought process worked that way. But he was definitely indulgent. And whatever he indulged in was always available.

"He's a huge talent. And it's one of those things where you just go… You wish you could go up to somebody and grab him by the shoulders and just shake [him] and say, 'What the fuck? You have what few others have, and look what you fucking did with it? You wanna fucking go out and do cover songs of your own shit from thirty years ago?' That's what they did. Him and [fellow former IRON MAIDEN singer] Blaze Bayley. Are you kidding me? You have to go on the road on a joint fucking tour, to do covers of the fucking bands you used to be in? Really? I'd rather play athe Holiday fucking Inn, doing fucking SEETHER songs, or fucking NICKELBACK, because that's not nearly as demeaning, to me. I'm sure the money was right. But really? Why didn't you take that talent and fucking create shit other people had to go on tour to cover, 'cause you had to tools. Were you that afraid of fucking succeeding. Because every time you got a new chance, you fucked it up. I'm not gonna say 'you fucked it up,' but every time he got a new chance, he didn't… It almost seemed like he didn't take it serious."