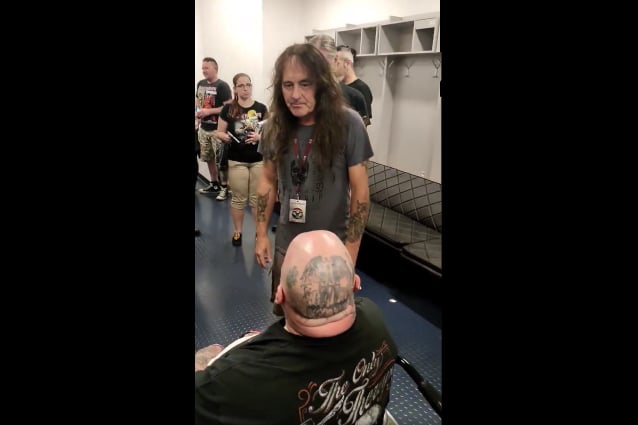 A longer video of former IRON MAIDEN singer Paul Di'Anno's first face-to-face meeting with the band's bassist Steve Harris in many years, which took place this past Sunday night (May 22) before MAIDEN's concert in Croatia, can be seen below. The video was uploaded by Stjepan Juras, a MAIDEN fan and author of many MAIDEN-related books, who is taking care of Di'Anno during his stay in Croatia

MAIDEN manager Rod Smallwood and Harris, whose group kicked off the 2022 leg of its "Legacy Of The Beast" world tour at the 22,000-capacity Arena Zagreb, came out before the show to greet a wheelchair-bound Di'Anno and chat with him for a few minutes. Paul has spent the last few months in Croatia receiving physiotherapy and lymphatic drainage treatments in preparation for his upcoming knee surgery.

Di'Anno played his first solo concert in seven years Saturday night (May 21) at the Bikers Beer Factory in Zagreb. The show was filmed and parts of it will be included in a documentary about Di'Anno, to be directed by Wes Orshoski, co-director and producer of the acclaimed 2010 film "Lemmy" about the MOTÖRHEAD icon.

After the video of the reunion of Steve Harris and Paul Di'Anno came out, I'm posting a much longer video of how it all really started. First came Rod Smallwood, whom Paul hasn’t seen since the 2013 Rock In Rio Festival, and then Steve Harris, whom everyone greeted along the way. This meeting triggered something that will be talked about soon. If you want to know more about everything, click on www.maidencroatia.com/warhorse