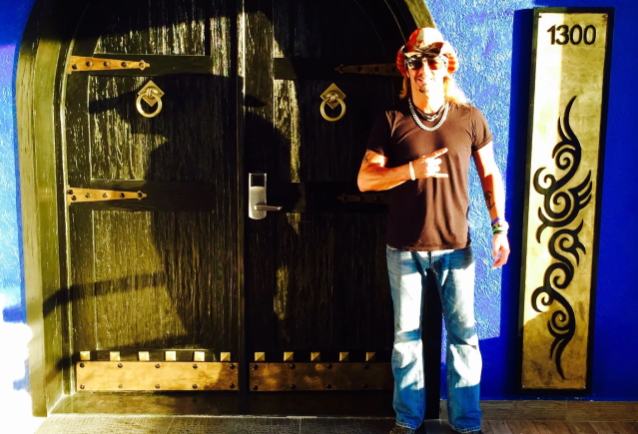 A new video tour of the Bret Michaels Rock Star Suite, the first-ever branded suite in the Hard Rock Hotel Riviera Maya, located in Puerto Aventuras, about one hour south of Cancun, Mexico, is available below. The suite spans over 8,000 square feet and was inspired by rocker Bret Michaels of '80s glam metal band POISON, VH1's "Rock Of Love" and "The Celebrity Apprentice".

Since its inception, Bret's Rock Star Suite property has garnered the attention of hotel/vacation industry leaders while remaining a mainstay destination for consumers and businesses. The suite has also received numerous awards and recognitions to date, including being voted by USA Today as 1 of 6 "Best Beaches", named "Best Luxury Hotel Suite" in North America by Jetset magazine, receiving a HOPSY (dubbed the "The Oscars Of The Travel Industry") for "Best Suite Design". In 2017, the Bret Michaels Rock Star Suite was voted "Mexico's Leading Hotel Suite" by World Travel Awards cementing it as one of the most-sought-after vacation spots in the world.

Bret's luxurious suite features an all-inclusive resort experience overlooking the ocean, complete with a state-of-the-art fitness center, bar, DJ booth and more. Using the same blueprint for all of his real estate ventures, Michaels was hands-on involved in both design and creation aspects for this suite. As a major REITs investor, Michaels has been known to sell well ahead of the bubble as it pertains to properties both domestic and international, including Arizona, Florida, California, Tennessee and Canada.

Viewed as an attraction all its own, Bret's Rock Star Suite has served as the setting for Hollywood celebrities and musicians the likes of IMAGINE DRAGONS, Elvis Duran and countless others.