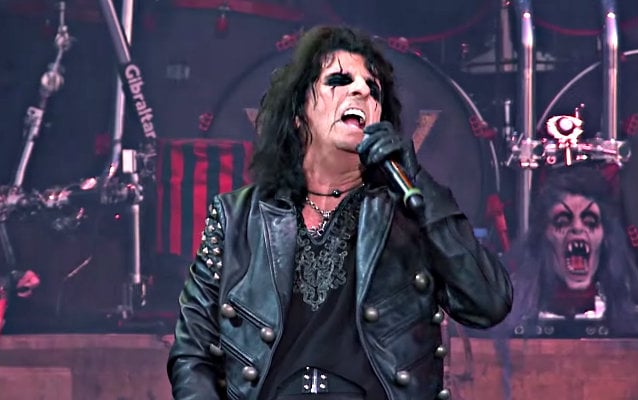 According to RollingStone.com, THE BEATLES legend Paul McCartney, actor Johnny Depp and AEROSMITH's Joe Perry make appearances on the forthcoming album from legendary rocker Alice Cooper featuring songs that were originally written and recorded by THE DOORS, Jimi Hendrix, John Lennon and THE WHO — members of the so-called "Hollywood Vampires" of the early and mid-'70s. Perry has contributed to several tracks on the CD, while McCartney will be heard on a new version of "Come And Get It", the song he wrote and produced for BADFINGER.

"He knew all the chords, the lyrics, everything," Perry said. "He didn't have any cheat sheets. It was like he'd been playing it his whole life. Me and Alice and Johnny were standing there and looking at each other, and I tell you — if there's any ego-lever in a room, it's Paul. It doesn't matter who you are or what you've done. If Paul's in the room, he's there. It was hard to focus on playing."

During Cooper's appearance on the February 9 edition of Eddie Trunk's SiriusXM satellite radio show, "Eddie Trunk Live", the legendary rocker spoke about his upcoming CD. He said: "I figured I'm gonna do a covers album. I've never done a covers album before. And I was talking to [producer] Bob Ezrin, and I said, 'Let's be specific then. Let's honor our dead drunk friends.' And we started going through the songs of who and what songs it would be, and it was really… You know, I mean, we said, 'Oh, yeah. We've gotta do that.' And then the [guest musicians] started showing up and saying, 'Hey, I wanna play on that,' and, 'I wanna play on that.' I can't tell you who's on what right now, 'cause it's not gonna be released yet, but it's the 'who's who' of everything. [Laughs] It was one of those things where, at one point, I'm looking around in the studio and I'm going, 'Holy crap! Look who's in the studio.'"

Cooper previously revealed that the upcoming album will include "four or five new songs," which the legendary rocker wrote specifically for the new effort. He told VH1 Radio Network's Dave Basner: "We decided that in order to set up the 'Hollywood Vampires' thing, you had to kind of tell the story, and you had to write songs that were going to set up the story, and then get into the covers. So we had fun sitting there writing these new songs around it. So it's going to be quite a package, this thing is."