The Rock And Roll Hall Of Fame has revealed an initial list of all-star presenters and performers who will take the stage during the 36th annual induction ceremony on October 30 at Rocket Mortgage Fieldhouse. Limited tickets are on sale now, including newly released production holds.

Initial lineup of special guests include:

This year's inductees are: Tina Turner, Carole King, THE GO-GO'S, Jay-Z, FOO FIGHTERS and Todd Rundgren in the Performer category, along with KRAFTWERK, Charley Patton and Gil Scott-Heron for Early Influence, LL Cool J, Billy Preston and Randy Rhoads for Musical Excellence, and Clarence Avant for the Ahmet Ertegun Award.

The ceremony will air on November 20 on HBO and stream on HBO Max alongside a radio simulcast on SiriusXM Rock & Roll Hall Of Fame Radio (310) and Volume (106).

Ballots were sent to an international voting body of more than 1,200 artists, including current living Inductees, historians and members of the music industry. Factors such as an artist's musical influence on other artists, length and depth of career and the body of work, innovation and superiority in style and technique are taken into consideration.

FOO FIGHTERS frontman Dave Grohl was previously inducted into the Rock Hall as part of NIRVANA in 2014.

Rhoads is one of the most influential hard rock/heavy metal guitarists of all time.

The OZZY OSBOURNE and QUIET RIOT axeman and two others were killed on March 19, 1982 when the small plane they were flying in at Flying Baron Estates in Leesburg, Florida struck Osbourne's tour bus, then crashed into a mansion. Rhoads was 25 years old. 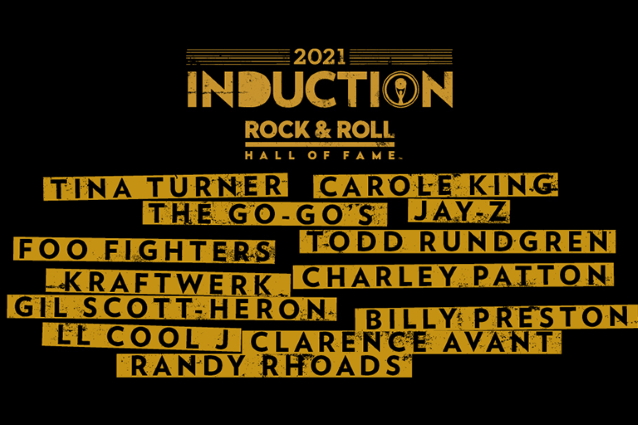