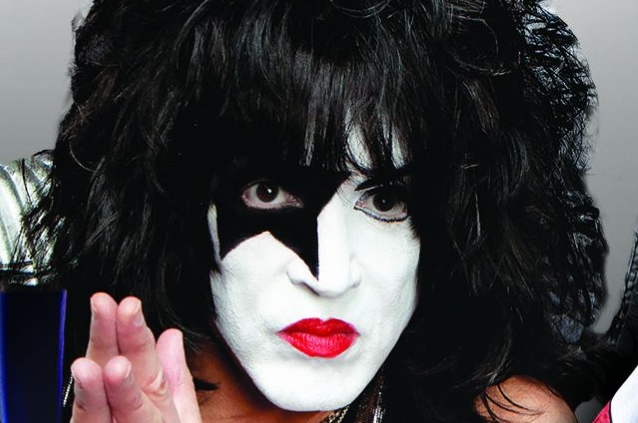 Paul Stanley says that it's unlikely KISS will produce any new music before finally calling it quits at the end of its upcoming "farewell" tour.

KISS hasn't released a full-length disc of new music since 2012's "Monster", which sold 56,000 copies in the United States in its first week of release to land at position No. 3 on The Billboard 200 chart. The band's previous LP, "Sonic Boom", opened with 108,000 units back in October 2009 to enter the chart at No. 2. It was KISS's highest-charting LP ever.

Over the weekend, Stanley stopped by the Rock 'N' Roll Fantasy Camp and was asked by teenage radio host Miles "The Shoe" Schuman if fans can expect to hear anything new from KISS prior to the completion of the group's "One Last Kiss: End Of The Road World Tour". He responded (see video below): "No. I don't think so. Look, it's a different time now. I could write 'Let It Be', and people would still say, 'That's great. Now play 'Detroit Rock City'.' And I understand it, because when songs have a history with you, they're kind of like a snapshot of a time in your life, and that's not something that anything can take the place of overnight."

He continued: "It's interesting that I think 'Modern Day Delilah' or 'Hell Or Hallelujah' are as good as anything we did [on the earlier albums], but I understand that people are more connected to those old classic songs. I understand it.

"Look, if you put on a live video concert of any band — if you put on [Paul] McCartney, if you put on THE [ROLLING] STONES — and you turn off the volume, I will tell you every time they're playing a new song, because the audience sits down."

Stanley added: "It's always interesting that people say, 'When are you gonna churn out new material?' But when those acts, or any classic act turns out new material, people tolerate it. They're asking you to do it and they're asking you to produce it, but at the same time, they really don't want it. So, at some point, I go, 'Really, what's the point?' Unless it's something that's fulfilling for me, to go back in the studio just to record new KISS material, I think everything we've done so far speaks volumes and it's enough of a legacy."

Paul had previously expressed uncertainty about the idea of making another KISS album in a number of other interviews, telling the "Loudwire Podcast": "If we're going to do an album, it would be because we want to do an album, not because of sales. I think we're living in a time, obviously, now where albums don't sell what they once did, so you either do it because it's a creative outlet and because it satisfies something in you, or not. If you're doing it purely for sales, then you're probably doing it for the wrong reason."

Paul's comments were echoed by his bandmate Gene Simmons, who said that he was "not incentivized" to release another KISS disc unless there are some major changes in the way music is consumed. He said: "The idea that you work your ass off and then someone with freckles on their face decides they want to download your music and file share — that's not what I work for. How'd you like to be a plumber, come over somebody's house and work all day to fix their plumbing and then when it's time to get paid, they say, 'No, I just wanted to say thank you.' No."

"One Last Kiss: End Of The Road World Tour" will launch in early 2019 and will likely last two or three years, according to Stanley.