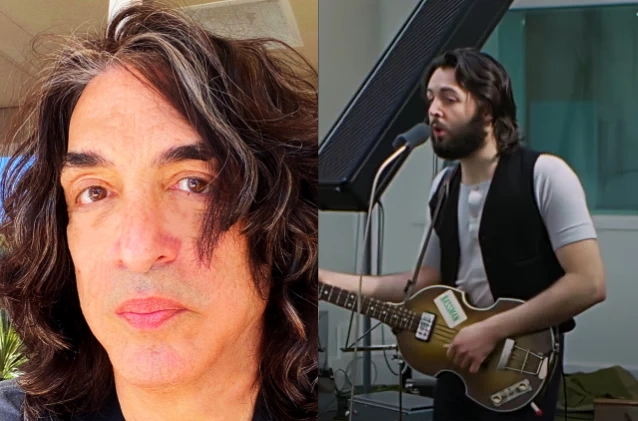 PAUL STANLEY Says THE BEATLES' New Documentary 'Get Back' Is 'Joyous, Astonishing And Humbling'

KISS frontman Paul Stanley has praised director and producer Peter Jackson's "The Beatles: Get Back" documentary, calling it "eye-opening, joyous, astonishing and humbling."

The three-episode, nearly eight-hour documentary features the four members of THE BEATLES — John Lennon, Paul McCartney, George Harrison and Ringo Starr — crafting what was to become their final album. (THE BEATLES recorded "Let It Be" before "Abbey Road" but released the latter first.) It also includes the band's iconic final performance on a rooftop in London.

Stanley, who previously said that his life was "changed forever" after seeing THE BEATLES on "The Ed Sullivan Show" in 1964, weighed in on the new documentary in a tweet Sunday night. He wrote: "WOW! Just watched The Beatles: Get Back. Eye opening, joyous, astonishing and humbling. To the very end their brilliance was without equal. The chemistry and magic between them is so powerful that seeing it end made me wish that much more they could have gone on forever. WOW."

Culled and restored from 60 hours of studio sessions and the aforementioned rooftop concert, "Get Back" has been praised for finally allowing us to experience what it felt like to be in the studio with the Fab Four. Some of the original footage appeared in a much more condensed form in director Michael Lindsay-Hogg's 1970 documentary "Let It Be", which was briefly available on home video in the 1980s, but never since. THE BEATLES drummer Ringo Starr was particularly unhappy with how that film came out, saying "there was no joy and no laughter" in it.

Stanley isn't the only hard rock or heavy metal musician to publicly praise "Get Back". Earlier this month, SLIPKNOT and STONE SOUR frontman Corey Taylor told HardDrive Radio's Lou Brutus about the documentary: "It is one of the most fascinating things I've ever seen. 'Cause it challenges everything we thought we knew about them, especially that period. But at the same time, it reinforces what we thought we knew. To me, it's cool watching their dynamic knowing that they'd been together since they were teenagers in one form or another. They'd been playing together since… I think it was — what? — 1956 when they all started kind of jamming together. And to watch that all kind of unfold and to see…

"Being in a band with people for multiple years, I understand how a dynamic works, so I can watch that with a certain savvy about how that plays out dynamic-wise, emotionally," Taylor added. "Knowing that, especially from George's point of view, who's such a great writer, but then you get in a circle, and you've got John Lennon and Paul McCartney, it's, like, where do you fit? So, watching him fight with that and try to kind of find his voice and find out who fits in with that whole thing, it's fascinating. And knowing how that feels, especially in SLIPKNOT — not so much in STONE SOUR, but in SLIPKNOT — I could relate to that in so many different ways. And then watching them get stoked when something would pop. Especially watching Paul figure out 'Get Back' and watching that happen was so cool, dude. Because I've done it — I've sat there and just twisted on a riff until the melody line comes to mind, and just playing it and exhausting every avenue. If you wanna know how to write a song, there's your blueprint right there. It's just that easy."

WOW! Just watched The Beatles: Get Back. Eye opening, joyous, astonishing and humbling. To the very end their brilliance was without equal. The chemistry and magic between them is so powerful that seeing it end made me wish that much more they could have gone on forever. WOW. pic.twitter.com/LvHzPQG5lf

50 years ago today I saw the Beatles make their debut playing on the Ed Sullivan Show and my life changed forever. pic.twitter.com/oJ4a4kMpoJ