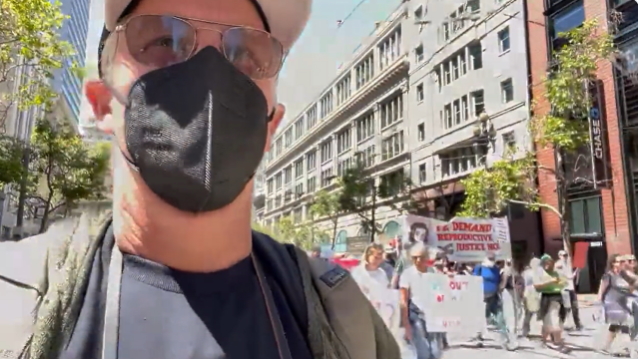 PEARL JAM guitarist Mike McCready joined pro-choice protesters at a Women's March rally in San Francisco, California on Saturday, May 14. He and thousands of other of abortion rights supporters took to the streets across the United States, angered by the prospect that the Supreme Court may soon overturn the landmark Roe v. Wade decision that legalized abortion nationwide a half century ago.

Yesterday afternoon, McCready took to his Twitter to share a short selfie video of him at the rally, and he included the following message: "I woke up in San Francisco after last night's Oakland show [by PEARL JAM] and joined the San Francisco march to protect peoples' freedom to choose!"

The members of PEARL JAM are longtime supporters of the pro-choice cause, having performed back in 1998 at Washington, D.C.'s Constitution Hall at a benefit for the abortion-rights group Voters For Choice. Three years earlier, PEARL JAM played a Voters For Choice benefit at the same venue with Neil Young, L7 and Lisa Germano to celebrate the 22nd anniversary of Roe v. Wade. That concert raised $180,000 for Voters For Choice.

At the time, PEARL JAM singer Eddie Vedder issued a statement expressing his feelings that birth control should be available to people who want it, regardless of age. "The escalation of violence at clinics is astounding," Vedder said, according to MTV News, referring to a rash of fire-bombing at clinics across the U.S. over the previous two years. "We hope funds from this concert will help elect lawmakers who will fight for clinic protections and support."

In a separate statement issued in 1998, PEARL JAM bassist Jeff Ament lamented the devastation caused by right-wing anti-abortion extremists, saying that he witnessed a fire-bombing at a Montana clinic several years earlier.

"It took tremendous resources to rebuild the facility," Ament said, "which now includes prison-type security around its perimeter. A family-planning clinic shouldn't look or feel like a high-security prison. Nor should anyone ever have to fear exercising their right to choose."

I woke up in San Francisco after last night’s Oakland show and joined the San Francisco march to protect peoples’ freedom to choose! pic.twitter.com/nl1Qwtqt7M