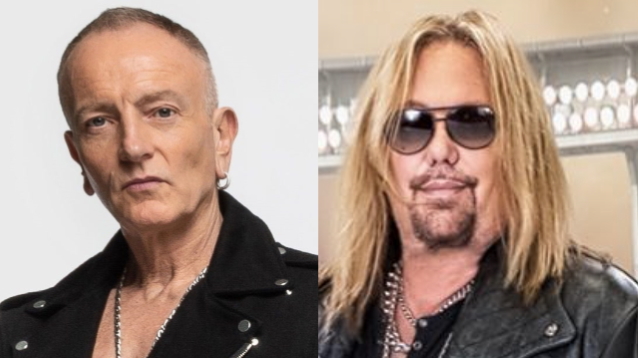 PHIL COLLEN Says A 'Trainer' Will Go On The Road With DEF LEPPARD And MÖTLEY CRÜE: 'Hopefully VINCE NEIL Will Be Working Out'

In a new interview with Favazz of the St. Louis, Missouri radio station KSHE 95, DEF LEPPARD's Phil Collen, whose band is still scheduled to hit the road with MÖTLEY CRÜE next month, was asked if he is concerned about CRÜE singer Vince Neil seemingly being out of shape and not being ready to hit the road as part of "The Stadium Tour". He responded (as transcribed by BLABBERMOUTH.NET): "No. I talk to [CRÜE bassist] Nikki Sixx all the time. We're friends. And I've known Vince forever. He's gonna be part of our team. The way I look at this whole thing… We wanna take this tour to the rest of the world — in Europe, Australia, Japan, all over the place, South America — so it's really important that everyone is part of the team. And we're inspired. Me and Joe [Elliott, DEF LEPPARD singer] — actually, all the guys — we're on the phone, and we start rehearsing in about a week."

The 64-year-old devoted health and fitness fanatic continued: "So, no. I think that MÖTLEY CRÜE are gonna be part of that team, as are [support acts] POISON and Joan Jett. We all stand as one.

"The great thing, when you go out on tour with KISS, it's all about the show; it's not about trying to upstage anyone or do that. Yeah, you can have a bit of that going on, but then you live and die by the show, and you wanna make that great. And that's a great lesson we've learned from KISS, and we apply that.

"So, no," he repeated, once again indicating he isn't worried about Neil's ability to perform. "I can't wait till we get out there. And hopefully Vince will be working out. We've got a trainer coming out. Yeah, it's gonna be really cool."

Collen's latest comments come less than a year after he weighed in on Neil's disastrous comeback performance at an Iowa festival.

In May 2021, Neil struggled to complete his solo concert at the Boone Iowa River Valley Festival in Boone. Based on fan-filmed video footage of the gig posted on YouTube, the now-61-year-old rocker, who hadn't performed in more than a year and a half due to the COVID-19 pandemic, began losing his voice several songs into his set, which consisted exclusively of CRÜE classics and cover songs previously recorded by the band.

Collen discussed Neil's return to the stage during an interview with "The Jeremy White Podcast". Asked if he had seen any of the footage of Vince's gig, Phil said at the time: "I heard about it. Hey, look, he's got a year [to get ready for 'The Stadium Tour']. There's a lot at stake when you got out [on tour], and you wanna be your best. Hopefully we'll be working out together and all that stuff. That's the other thing — we do have a camaraderie, especially with MÖTLEY CRÜE. With Nikki, we were talking just before the tour [was announced], like, 'We're gonna work out together. We're gonna do all this stuff.'

"One of the things I learned from touring with KISS is that they really go a hundred percent about the show and every aspect of the show, [including when] different bands are touring together," he continued. "Our crews would be working together on the KISS tour so the show would look great. And I do feel a thing with that. If the show is even better [for the other band], then it's even better for all of us; you want that to happen.

"With Vince, he's got a year to go," Phil added. "Hopefully everything is cool by then. I hope so. Fingers crossed."

DEF LEPPARD's "The Stadium Tour" with MÖTLEY CRÜE, POISON and JOAN JETT & THE BLACKHEARTS will launch on June 16 in Atlanta, Georgia. The 36-date trek, which is due to wrap September 9 in Las Vegas, was originally scheduled to take place in the summer of 2020 but ended up being pushed back to 2021, and then to 2022, due to the coronavirus crisis.

Sixx also said that Vince was "killing it" while working with "trainers" and "nutritionists" in preparation for "The Stadium Tour".