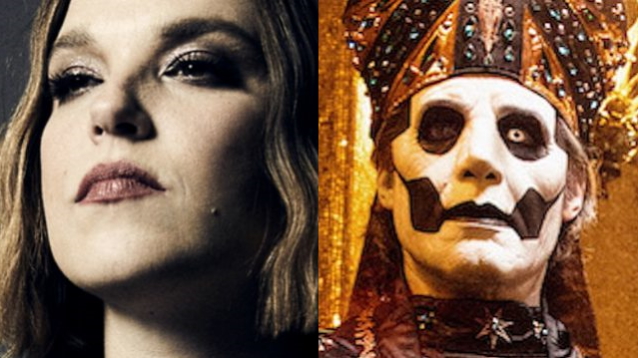 LZZY HALE: GHOST's TOBIAS FORGE Is 'The Most Interesting Person That I've Ever Met'

HALESTORM frontwoman Lzzy Hale recently spoke to U.K.'s Rock Sound about her appreciation for the Swedish occult rock band GHOST. She said (as transcribed by BLABBERMOUTH.NET): "This new [GHOST] album ['Impera'] I've listened to about 20 times now, and I'm obsessed with it.

"I love just the idea that you can have this heavy music that's almost religious satire and it has this comedic aspect to it and a smile, but also if you've ever been to a GHOST concert, there are people that legit think they're worshipping Satan… I just love all of those things together, in a nice little package, with this band."

Hale went on to praise GHOST mastermind Tobias Forge, calling him "a genius. He's such a smart man," she said. "And if you get to have a conversation [with him], he's the most interesting person, I think, that I've ever met — very well spoken.

"What I admire about him… I don't think I know any other band that does this, but Tobias always has a plan — he's thinking about five years ahead, where he needs to be with this band and this project," she explained. "I remember talking with Nick Raskulinecz, the same producer that just did our last record; he also did an album with GHOST. I remember him talking to me about how Tobias would show him all of these songs that were not meant for this specific record; they were meant for two records down the line. 'Cause he has a timeline and he has the story already figured out and all of the production already figured out. And [Nick] was, like, 'Oh, these are such great songs. We should record them.' And Tobias was, like, 'No. The world isn't ready yet.' [Laughs]"

She continued: "[Tobias has] done the same thing with me in the past where he's shown me some production drawings and little things that he's gonna be doing a couple of years from now. And then a couple of years would go by and we would go and see [GHOST in concert], [and we would be,] like, 'Oh, yeah. That was that thing he was talking about. That's amazing.' So just to be able to think like that I really admire, as far as just a career plan and a mission statement. Because I am completely not like that. I've tried the five-year-plan thing. And every time I make plans, we finally get to that point and something has changed, so I have to pivot and do something different. So I'm more of a living-in-the-now person. [Laughs] So we're the complete opposite, me and Tobias, in that aspect, but I definitely admire him for the way that he is."

Lzzy famously ended up dressing up as a nun for an onstage appearance during GHOST's October 6, 2015 performance at The Pageant in St. Louis, Missouri.

GHOST is continuing to tour in support of "Impera", which sold 70,000 equivalent album units in the U.S. in its first week of release to land at position No. 2 on the Billboard 200 chart. It marked the third top 10 album — and fifth top 40-charting set — for the Swedish act.

HALESTORM's fifth studio album album, "Back From The Dead", was released on May 6 via Atlantic. The follow-up to 2018's "Vicious" was produced by Raskulinecz, with co-production by Scott Stevens (SHINEDOWN, DAUGHTRY, NEW YEARS DAY).