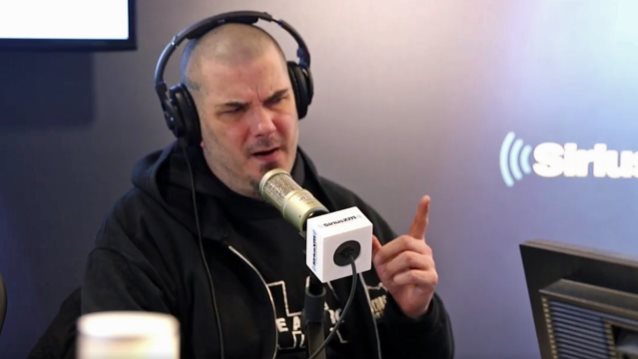 Former PANTERA frontman Philip Anselmo has blasted MACHINE HEAD's Robb Flynn and ANTHRAX's Scott Ian for suggesting he was racist after a video surfaced of him earlier in the year giving the right-arm salute and yelling a white-supremacist slogan at a California concert.

Anselmo performed the PANTERA classic "Walk" at the January 22 "Dimebash" event at the Lucky Strike Live in Hollywood in honor of late PANTERA guitarist "Dimebag" Darrell Abbott. As he left the stage, he made a Nazi-style salute. He appeared to say "white power" as he made the gesture, but later claimed he was joking about drinking white wine backstage and was reacting to the audience members up front who he says were taunting him.

During an appearance earlier today (Thursday, December 15) on Eddie Trunk's SiriusXM show "Trunk Nation", Anselmo said about what transpired that night (see video below): "As far as I understood, this was a gig for my murdered guitar player, and from the second I stepped out on the stage 'till the very end, and you can watch the YouTube footage for yourself, me growing more and more — drunkenly I may, but that's neither here nor there — aggravated by these… just two or three hecklers."

He continued: "When people start screaming 'racist' over and over and over and over again at me, what I did was show them exactly what the ugliest possible thing I could think of at the time was. [They were yelling at me] constantly through the entire [event]. They were looking for what they got, and sadly enough, I gave it to 'em. But the thing is, I've always engaged my audience — always — and that was part of the charm of every band I've ever been in and the type of frontman that I am. And there's one point in that video that I invited them to come up on the stage and I dared them to call me that to my face and I'd break their jaws. So at the end of the show, when I knew everybody was getting cleared out and whatnot, I lost my shit, so to speak, I did what I did, and, of course, I could have just walked away, and professionally walked away."

Anselmo then called out Flynn and Ian for their criticism of his actions at "Dimebash", accusing the MACHINE HEAD frontman of wanting to "ride the coattails" and the ANTHRAX guitarist of blatant hypocrisy.

Flynn — who played PANTERA songs with Anselmo at "Dimebash" — released an eleven-minute response video in which he denounced Anselmo as a "big bully" and a racist. He concluded by saying that he would never play another PANTERA song again. Ian, who is Jewish, released a statement on his official web site saying, "Philip's actions were vile" and invited Anselmo to make a donation to the Simon Wiesenthal Center.

Anselmo told Trunk earlier today: "These so-called peers — those are your words — who gave me backlash need to take a good, cold stare in the mirror themselves. And anyone else who throws that word 'racism' or 'racist' around so freely, they need to understand the implications of said word. That's a heavy-duty implication when you don't know jack shit about me except for what you've seen on what? In live performances, music videos, interviews… whatever. And taken out of this whole thing is my dark sense of humor, which at the time, I was half angry, half joking, because, funny enough, just before the gig started, Doug Pinnick from KING'S X, a gay, black man, came to say hello to me. I kissed him on the lips because I'm comfortable as hell with my sexuality, and I don't care what people think about me sexually. And then he said, 'Man, you taste good,' and it was the white wine. I said, 'It must be that white power, hahaha.' Yes, so that was a joke there. And then some of my musical peers — your words — took that, and, by the way, the main culprit [Editor's note: referring to Flynn] wasn't even privy to the room [in the backstage area] that I was in."

He continued: "Everybody in my camp and everybody around us, anybody who's ever watched Robert [Flynn] over the years knows that he watches me, and watches me, and watches me, and sits in the corner, and watches me, and then when we get on stage together… You know what? It all comes down to, and straight up, he wants to ride the coattails, Jack — he wants to ride the coattails. He started off a song, and I told him to stop. I hadn't even announced the song, so he took that as a slight. He started a song without me announcing the goddamn song, and I said something like, 'You don't know me,' which is, once again, my sense of humor, and I know it hurt his little… his ego or whatever, which, you know, sorry for you, brother, but I'm not sorry. So he made an eleven-minute video, and some dude who knows nothing about me except PANTERA and this and that. I'm a believer in freedom of speech whether you're joking around or not — whatever."

Anselmo added: "This whole I'm-a-racist thing is infuriating, because it's false — absolutely false. And I'd like to turn around and say, hey, what have you done to better your community, Robert? If you're gonna call me out on this supposed heinous act, what have you done? What have you done? I know what I've done. I know what I've done for the inner-city kids in Detroit when the Kronk boxing gym was getting closed down, I forked over thousands of dollars that I most certainly did not have to make sure those kids got fed, clothed and had a place to sleep, because it was run by the last father figure I had in my goddamn life, a black man named Emanuel Steward, rest in peace, who used to call me before every fight that he would call on HBO, and say, 'Whatcha think, Phil?' And he would ask me my opinion of what I thought the outcome would be."

As for Ian, Anselmo said: "The day after it happened, [Scott] goes, 'Phil…' He wrote me some e-mail, 'What I saw was ugly,' and this, that and the other. So says the guy who writes a record [in 1985] called 'Speak English Or Die' [as a member of STORMTROOPERS OF DEATH]. And if that record would have come out this year, last year, fucking forget it. You think he'd get pounced on? You're damn right he would, and he knows it. 'And if you're really sorry, donate to this Nazi hunter Jewish cause' or whatever,' I did it in an hour. Did you ever hear about that story? Of course you didn't. You know why? It doesn't make good headlines. I donated that hour, if not that goddamn second."

"People say I have a history [of racism]," Anselmo told Trunk. "Okay, you go back in the day when I was in my 20s, and there was a shirt circulating around that said 'Stop Black-On-Black Crime,' I took offense to it — a twenty-something-year-old Philip Anselmo took offense to it, because it was this exclusive thing in my brain. And, to me, it felt like, 'Stop black-on-black crime? Why not just have a shirt that says, 'Stop crime'?' Now, here I am, almost fifty years old, and I can agree with that shirt wholeheartedly, and now I see where it's coming from; I get it. Did I misspeak at the time? Coming from the upbringing that I had, I'm not so sure. I don't know. But I most certainly did not mean to be racist. Calling out bullshit on crime is not racist."

He continued: "It's the motherfuckers out there, straight up, that view through that lens… If they're looking for something racist in anything, chances are if you're looking through that particular broken lens, you're gonna find it."

Asked if he thought the the controversy surrounding the "Dimebash" incident has subsided now that he has given several interviews where the subject has come up, Anselmo said: "I don't pay attention so much to the music press. I think the best part of me hopes and knows in my heart that most people are logical thinkers. From what I've seen, and especially from going out and doing horror conventions all around the country, I've gotten nothing but love, nothing but love. And it's from all kinds of people, not just one type of person, not just one color of person. Love from all sides of the spectrum — male, female, whatever, gay, straight, bi, black, brown, yellow, etcetera — nothing but love. So, to me, that shows me that, well, yes, there's logical thinkers out there. Let's just hope this think called logic can possibly spread as quickly as the germ of negativity, and that lens of preconceived bias that people want so much — they want it so badly… Why they want it? I don't know. You know why? Because I know human nature. It's so much easier to hate than to put the fucking effort into love."

Eddie Trunk sits down with lead singer of Pantera and Superjoint, Phil Anselmo