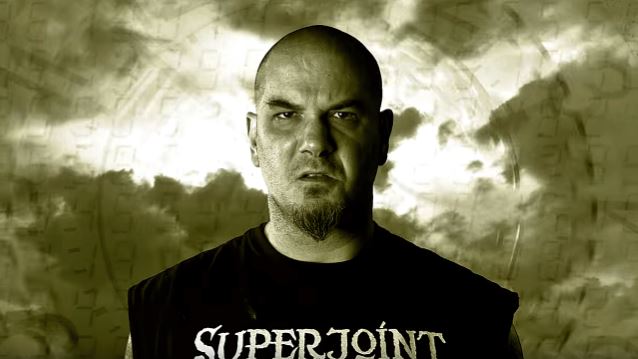 PHILIP ANSELMO On LEMMY's Final MOTÖRHEAD Shows: "He Hated The Pain, But Loved The Stage'

Former PANTERA and current DOWN and SUPERJOINT frontman Philip Anselmo was interviewed on a recent installment of the "Fantasm" podcast. You can now listen to the chat below.

Speaking about the last time he saw Lemmy before the iconic MOTÖRHEAD frontman's death, Anselmo said: "We played a festival together and he wanted to see me. And, of course, I went in and talked to The Great One. I'd known him for two decades before that. And he was always, always, always — especially when I was young — he was always the one to tell me that music and your lifetime in music and your popularity and whatever, it's here and gone — it's a fleeting thing, and it's also ebb and flow. There'll be points in time in your career, if you keep going, where you'll be misunderstood, you'll be not popular, what you do won't be 'in.' And this was back when I was in PANTERA. And he said to me back then, he said, 'You know, what you guys do really doesn't sound, to my ears, that different from what we do.' And at the time, I was thinking to myself, 'Yeah, it's different, but I guess it isn't all that different,' figuring it's drums-bass-guitar-vocals format; I can see where he's coming from. But the bigger picture now, in hindsight, is the fact that music is ebb and flow, and the more bands that you're in, the more different-size crowds you'll have, type of crowds you'll have, and all that shit."

He continued: "Looking back on it, I remember about a couple of months before he passed when we did a festival together, I reminded him of that story. And he [told] me, 'Well, Phil, let's have a cigarette to our voices.' So we smoked a cigarette together."

Describing Lemmy as a "very, very real guy and a very, very down-to-earth guy," Anselmo said that the MOTÖRHEAD legend was "miserable during those last shows [he played with his band]; he was in a lot of pain. But he did not want to leave the stage. And I can feel that, because I'm a walking injury. I mean, I wake up and I feel like I'm in a car wreck every fucking day of my life; I've blown out a lot of different parts of my fucking body doing what I do. And I've realized that these days, I don't have to go up there and destroy myself to get the fucking point across."

Anselmo added: "[Lemmy] hated the pain, but loved the stage. And I can relate to that."

SUPERJOINT will embark on part two of its "Caught Up In The Gears Of Application" U.S. live takeover this month. The trek will make its way west from San Antonio, Texas in mid-April through mid-May with additional dates to be announced in the coming weeks. Support will be provided by Motor City thrashers BATTLECROSS and noise rock eccentrics/Housecore labelmates CHILD BITE, also of Detroit, who both trekked out with SUPERJOINT during the first leg of the tour in January.